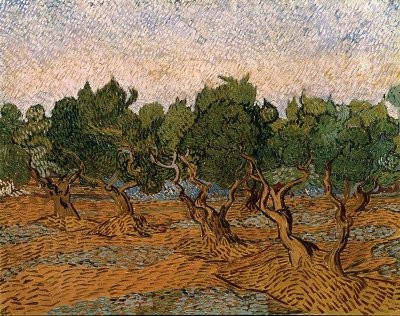 Olive Grove, by Vincent van Gogh, reflected Vincent's long-held interest in the local olive trees. When Vincent first arrived in Saint-Rémy, he wrote to Theo that the olive groves reminded him of the heightened colors he had sought when he moved to the south. The leaves appeared like "old silver...turning to green against the blue," and the "orange-colored plowed earth" suggested nature's fecundity. After more than six months in confinement, Vincent van Gogh's vision remained; in Olive Grove only the sky has changed to a cooler greenish blue.

Vincent suffered several attacks of epilepsy over the next several months. On the next page, you'll find a detailed examination of a painting van Gogh made during his recuperation.