A Corridor in the Asylum by Vincent van Gogh 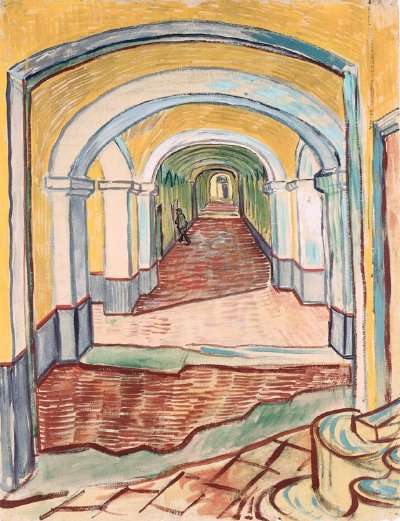 Vincent van Gogh's A Corridor in the Asylum (black chalk and gouache on pink ingres paper, 25-5/8x19-5/16 inches) belongs to New York's Metropolitan Museum of Art as part of a 1948 bequest from Abby Aldrich Rockefeller.

In his 1889 work, A Corridor in the Asylum, van Gogh painted the corridors of the asylum, just as he had painted the men's ward at the hospital in Arles. Here, only a single figure can be seen, passing from the seemingly endless hall into one of the anonymous rooms that stretch along the length of the corridor. The long, narrow hall in A Corridor in the Asylum, penetrating into the deep distance, conveys the sense of futility Vincent van Gogh experienced in confinement. Van Gogh's letters also reveal an increasing discontent, and he began to propose the possibility of leaving the asylum and living with supervision.

Next, we'll see another painting that echoes Vincent van Gogh's time at the Yellow House.