Fall of Man Within the Sistine Chapel Ceiling

Michelangelo's painting Fall of Man is on the ceiling of the Sistine Chapel, Vatican (ceiling 130 feet 6 inches x 43 feet 5 inches).

In Michelangelo's Fall of Man from the Sistine ceiling (1508-12), a groundbreaking depiction of the temptation and expulsion from the Garden of Eden, the two events are united by an enormous tree whose limbs are partly formed by an enticing Satan on one side and an angry angel of justice on the other. This scene shows the evolution of Michelangelo's style as he worked on the ceiling. For the first time, the figures occupy the entire foreground and display the use of foreshortening, which was to become even more dominant in later scenes.

The next detail is of one of the sibyls, the Cumaean Sibyl, a work in which Michelangelo's growing fondness for large-scale figures is apparent. 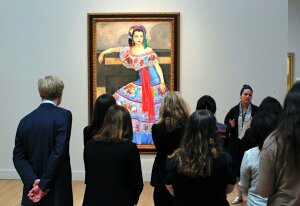