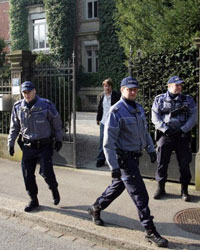 Guards outside of the E.G. Bürle Foundation museum, which was robbed at gunpoint in 2008.
Nicholas Ratzenboeck/AFP/Getty Images

When three men walked into the E.G. Bürle Foundation museum in Zurich, Switzerland, on Feb. 12, 2008, the masterpieces didn't stand a chance. In broad daylight, one man pulled a gun while the other two grabbed the four paintings closest to the door. It seems to be pure luck that they grabbed the most valuable piece in the museum's collection, Paul Cézanne's "Boy in the Red Waistcoat," [source: Associated Press]. The thieves got out within minutes, leaving stunned museum patrons and staffers lying face-down on the floor.

The four paintings together are worth approximately $163 million, making it one of the biggest art thefts ever in Europe -- and Europe has seen its share of art theft [source: Associated Press]. Two weeks before the Bürle heist, two Picassos were stolen from another museum nearby. Thieves grabbed 20 paintings from the Van Gogh museum in Amsterdam in 1991 and a couple more in 2002. The Louvre in Paris lost the "Mona Lisa" in 1911. And "The Scream" was taken from Oslo museums twice in 10 years. Despite the threat of jail time and the unmistakable (read: unsellable) fame of the stolen goods, art theft has become more common in the last couple of decades, perhaps due to a combination of underfunded security and rising art prices.

The 2008 Bürle robbery proves that security doesn't mean much when thieves are willing to use force. Art heists are increasingly conducted at gunpoint -- a brute means of ensuring that they get what they came for. But the most impressive art heists are the ones in which the criminals rely on something more than physical threats. We'll look at 10 of those in this article, starting with one that begs the age-old question: How many thieves does it take to dig a tunnel into a museum?