Ignudi Within the Sistine Chapel Ceiling 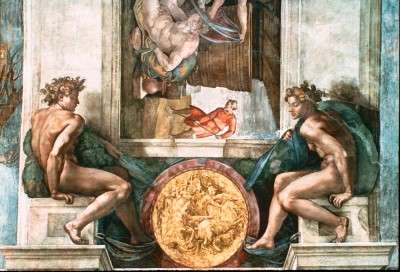 Ignudi detail from the Sistine Chapel ceiling (ceiling 130 feet 6 inches x 43 feet 5 inches) by Michelangelo. The painting can be seen at the Vatican.

Michelangelo's Ignudi paintings can be found on the Sistine Chapel ceiling (1508-12). These are two of the twenty nude youths, or ignudi, surrounding the ceiling's scenes. Functioning as animated decorative elements, they are similar in purpose to the attendants Michelangelo painted for the sibyls and prophets.

Michelangelo showed these nudes in many poses and expressions, as if reacting to the adjacent scenes. Although many of the poses are drawn from pagan sources, there was also an established tradition supporting nudity in Christian art. All souls were believed to be naked before God and are indeed depicted as such in Michelangelo's Last Judgment.