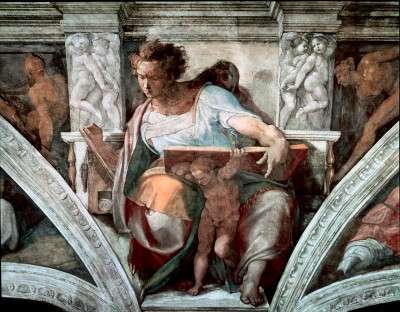 This Sistine ceiling (1508-12) painting of the Prophet Daniel clearly shows that Michelangelo reached a high point in the evolution of his pictorial style in the works of 1511. Figures such as Daniel assumed gigantic and truly heroic proportions, overflowing their thrones and filling their space entirely. In part, this was done to make the figures easier to see and more powerful when viewed from a distance. The significance of the story of Daniel to Christianity, like that of the other prophets on the ceiling, lies in the belief that his visions and actions foretold the coming of Christ.

The last detail to be studied in this article is one depicting two of the twenty ignudi. Learn more about the ignudi on the next page.