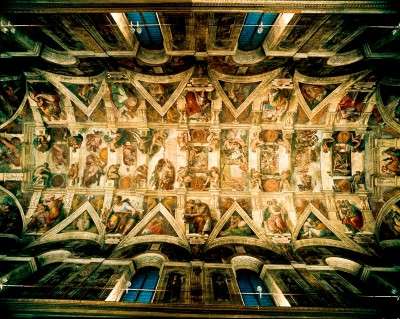 The Sistine ceiling (1508-12) commission from Julius II, which was originally for paintings of the twelve apostles and several decorations on the Chapel ceiling, grew to include prophets from the Old Testament alternating with sibyls from classical antiquity. Due in part to the enthusiasm with which Julius II received the artist's increasingly elaborate plans, Michelangelo was given the freedom to realize his ambitious vision for the frescoes.

By October 31, 1512, the master had completed frescoes of more than three hundred figures on the ceiling. These magnificent paintings, which have recently emerged from many years of restoration, yielded some of the most extraordinary pictorial images of all time and forever altered the course of artistic endeavors in the Western Hemisphere.

Go to the next page to learn about one of Michelangelo's five sibyls present on the Sistine ceiling, the Delphic Sibyl.