Banks of the Seine by Stanislas Lepine 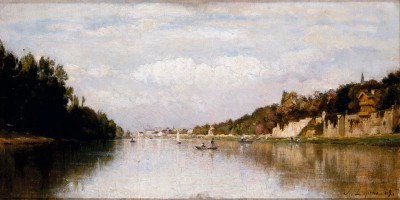 Banks of the Seine by Stanislas Lépine is an oil on canvas (11-7/8 x 23 inches) that is on display at Musée d'Orsay, Paris.

Stanislas Lépine (1835-1892) had one favorite subject, the Seine. His placid paintings depict the great French river in its many different aspects. Although not strictly speaking one of the Impressionists, the moods of his paintings closely resemble those of the group's.

Lépine only exhibited with the Impressionists in the first exhibition. Among his three works was Banks of the Seine (1869), a serene view of the river from a point on the water that allowed Lepine to include both banks. His attentive rendering of reflections on the water -- distinct at the highly lit right shore and obscured on the left -- is similar to Claude Monet's and Camille Pissarro's river views.

10 Circus Safety Strategies the Audience Doesn't See
You Are the Art at These Museum Exhibitions!
How Knife Throwing Works