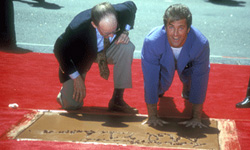 Getting a DUI and making a few apology-necessitating remarks isn't exactly scandalous by Hollywood's standards. But when arrest documents show that one of the biggest stars on the planet went on an angry, anti-Semitic rant, it qualifies.

In the wee hours of July 28, 2006, Gibson was pulled over on Malibu's famed Pacific Coast Highway after being clocked at nearly 90 miles (144.8 kilometers) per hour. There was an open bottle of tequila in the car, and Gibson was initially cooperative. But after he was handcuffed and placed in the squad car, he proceeded to spew anti-Semitic remarks to the arresting officer, who was Jewish.

The obligatory apology soon followed, but it was too late. The aftermath was a media circus, with actors, agents and the Anti-Defamation League all weighing in on Gibson's actions. Hollywood has longstanding ties to America's Jewish community, and there were even calls from some prominent Jews to blacklist Gibson. Mel's father was even looped into the conversation because he has publicly denied the severity of the Holocaust.

In the end, Gibson was sentenced to three years of probation, but the detriment to his career has lasted much longer. His last major film before his DUI, "The Passion of the Christ," grossed around $370 million domestically. His first major endeavor after the incident grossed not quite $51 million [source: Box Office Mojo]. As of early 2012, most of his post-DUI media attention has come not from creative projects but from a former girlfriend's allegations of serious physical and emotional abuse.