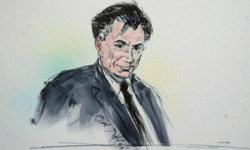 The courtroom sketch: One publicity shot that many celebrities would prefer not to have. This sketch is of Robert Blake, who was on trial for his wife's murder in 2004 and 2005. He was acquitted.
Frazer Harrison/Getty Images

Pop quiz (pun intended): Hollywood and scandal go together like which of the following?

If you answered all of the above, you're correct! And those are just three of the nigh-infinite number of scandals to have come out of Tinseltown. From DUIs to drug abuse and from infidelity to diagnosable insanity, celebrities provide the media with ample fodder for daily sensations.

But plenty of people cheat on their spouses and throw public fits, so why are we so interested when celebrities do it? One hypothesis is that our obsession with celebrity scandal comes from the halo effect. Research shows that when a person shows unusual talent in one area of life, we tend to believe that extends to all areas of life. This propensity to hold celebrities to a higher moral standard makes their flaws even more scandalous [source: Heflick].

But in a town where there's no such thing as bad press, flaws aren't necessarily a negative. In fact, scandals can actually boost a celebrity's popularity; controversy can sell tickets and bring in viewers as effectively as a rave review can. Let's take a look at 10 of the most jaw-dropping scandals to come out of Hollywood.