by Chris Obenschain
Prev NEXT
8 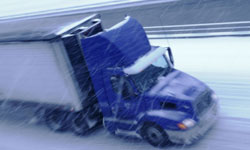 Any time you mix icy roads with heavy vehicles, you're going to have at least a few scary moments, but when you add the imminent threat of avalanches, the show becomes downright terrifying. That makes it hard to pick a single moment from this series as the most frightening. Watch as drivers caught in an avalanche's path are powerless in the sea of snow that carries their trucks down the mountain. As they grapple with danger, you can see crosses lining the road, marking spots where truckers before them were caught in the snow's unstoppable path.

Despite some close calls, none of the show's stars have been caught by an avalanche yet, but watching them navigate the danger zones is heart-stoppingly scary.