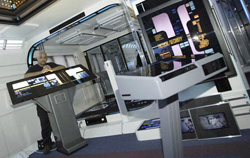 Interior decorator Tony Alleyne made his apartment over in the style of the later "Star Trek" TV shows and movies. See more pictures of gadgets.
Ross Kinnaird/Getty Images Entertainment

"Beam us up." It's one of the most iconic lines in television history. It's something often heard in the hit science fiction television series "Star Trek" and all of the television shows and movies that followed.

The transporter essentially dematerialized a human body at one point only to rematerialize it in the transporter bay on the ship. Somehow, it broke down atoms and molecules within the body -- scattered them through the vacuum of space without losing a single one from point A to point B, then voila, that person re-emerged out of thin air. Sounds pretty cool, though impossible, right? But what if there was such a device?

The truth is, you can forget about a transporter. No one has been able to realize such a concept. But that doesn't mean some of the ideas that seemed far-fetched when the show debuted in 1966 haven't become a reality. In this article, we feature the top 10 technologies from Star Trek that actually did come to fruition, listed in no particular order. Some of them may surprise you.