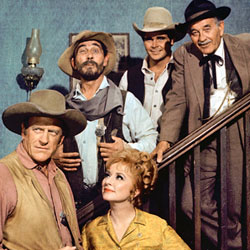 Gunsmoke tops the list as the longest-running dramatic series in network television history with 635 episodes. Set in Dodge City, Kansas, during the 1870s, Gunsmoke began as a radio program in 1952, switched to the land of visual entertainment in 1955, and finally ended its 20-year run in 1975.