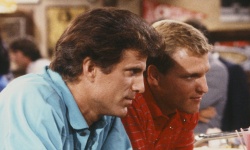 A great TV theme song can tell you everything you need to know about a show in less than a minute. Better yet, if you can sing a few lines at work the next day and everyone joins in, you know you're on to something worth watching!

1. Where Everybody Knows Your Name (Cheers)

Written by Judy Hart Angelo and Gary Portnoy (and sung by him, too), this comforting tune conjures up images of a place where the lonely and downtrodden can find a friend to lean on, where people can forget about their troubles for a while, and yes, "where everybody knows your name." And that's exactly what Cheers did for 275 episodes from 1982 to 1993.

2. Love Is All Around (Mary Tyler Moore)

Songwriter Sonny Curtis wrote and performed the empowering theme song for this trailblazing show about women's lib and the single life of spunky career woman Mary Richards. The opening sequence showed a fresh-faced Mary as she arrives in her new city and tosses her beret into the air out of the pure excitement of starting a new life. The original lyrics contemplated ". . . you might just make it after all," but after the first season, when it was clear that Mary would be a success, the lyrics were changed to ". . . you're gonna make it after all!" The bubbly and upbeat song has even been covered by Joan Jett & The Blackhearts and Sammy Davis, Jr.

Series creator Sherwood Schwartz collaborated with composer Frank DeVol to come up with the much-repeated theme song that describes what happens when a second marriage merges two families and six children under one roof. The song alone is memorable, but so is the opening sequence, which divided the screen into nine squares, one for each family member, including the housekeeper Alice. On the left, we saw the three daughters ". . . All of them had hair of gold, like their mother. The youngest one in curls." The right side introduced the three sons, who with their father made ". . . four men, living all together. Yet they were all alone." Who sang the song, you ask? The cast, of course!

All you have to do is listen to the theme song -- it's all there! But here it is in a coconut shell: Five passengers went on a boating expedition that was supposed to last only three hours, but there was a storm, and the S.S. Minnow shipwrecked. The Skipper, his goofy first mate, and the passengers set up house on an island and made various futile attempts to be rescued.

True Gilligan's Island aficionados know that there were two versions of the theme song, which was written by George Wyle and the show's creator Sherwood Schwartz. The first version specifically mentions five of the cast members, then lumps two other characters together, referring to them as "the rest." But Bob Denver (aka Gilligan) thought the song should be rewritten to include "The Professor and Mary Ann." Denver may have played the doofus on camera, but he used his star power to get equal billing for his fellow cast mates. He truly was everyone's "little buddy."

During the first two seasons there was no theme song! Then show creators William Hanna and Joseph Barbera wrote lyrics for a tune by Hoyt Curtin. The show, which took place in the prehistoric town of Bedrock, was a parody on contemporary suburbia. There were no brakes on cars, just bare feet to slow things down. Cameras were primitive -- birds feverishly chiseled slabs of rock to capture various images. And instead of a garbage disposal, people just kept a hungry reptile under the sink. Still, it was a "yabba-dabba-doo time. A dabba-doo time." In fact, it was a ". . . gay old time!

Written and performed by The Rembrandts, "I'll Be There for You" pretty much sums up the premise of these loyal friends who supported each other through life's ups and downs. The intensely popular sitcom showed just how funny it is to be in your twenties (eventually thirties), single, and living in New York City. Three guys and three girls formed a special bond as they roomed together, sometimes dated each other, and always entertained audiences worldwide. The song wasn't intended to be a full-length track, but eventually the band went back into the studio and recorded a longer version of the song, which topped U.S. charts and reached number two in the U.K.

7. Those Were the Days (All in the Family)

Longing for a less complicated time, "Those Were the Days" was written by Charles Strouse and Lee Adams and was performed at the family piano by bigoted, blue-collar Archie Bunker and his screechingly off-key "dingbat" wife, Edith. In the show, which aired from 1971 to 1979, staunchly conservative Archie is forced to live with a liberal when his "little goil" Gloria and her husband, Michael, move in with the Bunkers. The resulting discussions shed light on two sides of politics and earned Michael the nickname "Meathead."

TV and film composer Vic Mizzy wrote the music and engaging lyrics that helped to describe the "creepy . . . kooky . . . mysterious . . . spooky . . . and all together ooky" Addams Family. The show takes a peek at the bizarre family: Gomez and Morticia; their children, Pugsley and Wednesday; Cousin Itt; Uncle Fester; and servants, Lurch and Thing -- who all live together in a musty castle. The show lasted only two seasons, but it lives on in pop culture through reruns, cartoons, movies, and video games.

Bill Haley and His Comets recorded a new version of their hit "Rock Around the Clock" for the theme song of the show about the middle-class Cunningham family and their life in Milwaukee in the 1950s and 1960s. After two seasons, the song "Theme to Happy Days," composed by Charles Fox and Norman Gimbel and performed by Truett Pratt and Jerry McClain, moved from the show's closing song to the opener. The song was released as a single in 1976 and cracked Billboard's top five. The final season of the show featured a more modern version of the song led by Bobby Avron, but it was unpopular with fans.

Factory workers never had so much fun! Laverne and Shirley were two kooky girls who were introduced to TV audiences on Happy Days and ended up with their own hit show. They got into all kinds of trouble but always made it look like fun. The upbeat theme song was written by Charles Fox and Norman Gimbel and sung by Cyndi Grecco. The lyrics were empowering, but perhaps the most repeated line over the years was a mix of Yiddish and German words: "Schlemiel! Schlemazl! Hasenpfeffer Incorporated!"

Sesame Street was the first TV show to merge entertainment and learning for the preschool set and is largely responsible for children starting kindergarten knowing their letters, numbers, and colors. The show, which airs in more than 120 countries, has won more than 100 Emmy Awards, making it the most award-winning TV series of all time. The cheerful and idyllic theme song was written by Joe Raposo, Jon Stone, and Bruce Hart, but the singers are all children. Or at least they were when the show debuted in 1969!

Here they come. . . . The original "prefab" four, The Monkees were a mix of zany actors and musicians cast as a rock band for the 1960s TV show of the same name. "Theme from The Monkees" was written by Bobby Hart and Tommy Boyce, and once the band members were cast, they recorded the song. The band was so successful that they went on tour and three of their songs reached number one on U.S. charts. The show only lasted two seasons, but The Monkees are now best known for their musical success and occasionally get together for reunion tours.

When The Andy Griffith Show debuted in 1960, Sheriff Andy Taylor became one of TV's first single dads when his wife died and left him to raise their young son, Opie, in the small town of Mayberry. Aunt Bea came to town to help out, and Deputy Barney Fife helped keep small-town crime at bay. The result was an endearing slice of Americana that still lives on in syndication. The show's theme song was written by Earle Hagen and Herbert Spencer and is memorable but not for the lyrics -- there are none! The melody is carried by a lone whistler (Hagen) and accompanies footage of Andy and Opie heading off together for some quality time fishing.

The Love Boat was just one of producer Aaron Spelling's offerings that dominated TV sets in the 1970s and '80s. Love was definitely exciting and new every week when the Pacific Princess cruise ship set sail with a new set of passengers and a new set of challenges! Paul Williams and Charles Fox wrote the theme song, and for the first eight years, Jack Jones provided the vocals, but in 1985 Dionne Warwick recorded her version for the show. With lyrics such as "Set a course for adventure, your mind on a new romance . . ." people were hooking up all over the Pacific seaboard.

When hillbilly Jed Clampett struck oil while hunting on his land, he packed up his family and moved where the other rich people lived -- Beverly Hills, California, of course! His beautiful and usually barefoot daughter, Elly May, attracted a lot of attention as did pretty much everything about the Clampett family. Series creator Paul Henning wrote the "Ballad of Jed Clampett," which was performed by bluegrass musicians Flatt and Scruggs. After the show debuted in 1962, the song made it to number 44 on the pop charts and all the way to number one on the country charts.

One of the most popular TV shows ever produced, I Love Lucy starred Lucille Ball as zany redhead Lucy Ricardo and Desi Arnaz as her husband, Cuban bandleader Ricky. Lucy and her reluctant neighbor and best friend, Ethel Mertz, were always involved in one harebrained scheme or another during this classic's six-year run. The show's theme song, written by Harold Adamson and Eliot Daniel, is most recognizable in its instrumental version, but the song does have lyrics. During a 1953 episode in which Lucy believes everyone has forgotten her birthday, Ricky croons "I love Lucy, and she loves me. We're as happy as two can be. . . ."

17. A Little Help from My Friends (The Wonder Years)

Set in the late 1960s and early 1970s, The Wonder Years chronicled the life of teenager Kevin Arnold as he grows up in suburbia in a middle-class family during this turbulent time. During the opening credits, the theme song, "A Little Help from My Friends," plays alongside "home movies" of Kevin and his family and friends. Hardly recognizable as the classic Beatles tune, Joe Cocker's cover of the song is much slower and in a different key but was reportedly loved by the Fab Four themselves.

In this family drama, the Pryor family faces the social and political issues of the 1960s, while teenager Meg Pryor and her friend Roxanne are regular dancers on American Bandstand, which sets the show to the soundtrack of the '60s. The theme song, "Generation," written and performed by Tonic's Emerson Hart, takes listeners back to a time when life was much simpler and safer. With lyrics like "we just want to dance all night . . ." and ". . . This might be the only time around . . . ," the song inspired a "seize the day" attitude. The show had an extremely loyal fan base, but poor time slots assigned by NBC resulted in low ratings, and the show was unexpectedly axed following the third season-ending cliffhanger, which left fans disappointed and longing for more.