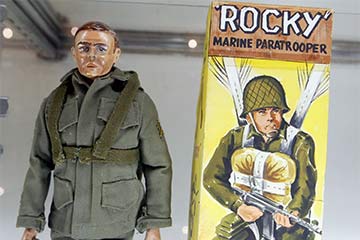 The prototype for the G.I. Joe action figure, 'Rocky the Paratrooper,' was displayed at the 2003 Hasbro International G.I. Joe Collectors' Convention. It sold for $200,000 at auction.
Justin Sullivan/Getty Images

In 1959, Mattel introduced Barbie, named by Mattel co-founder Ruth Handler for her daughter. Barbie was an instant – and eternal – hit with girls. Her popularity led people to begin seeking a similar toy and the same success for boys [source: Mattel].

It didn't take long for Stan Weston, an acquaintance of Handler who was also in the toy business, to think up a way that Barbie – with her endless supply of clothes and accessories – could become a toy for boys. As Weston read about military history, the idea of a soldier doll came to him. The doll could have a variety of military uniforms from around the world. It would need cars and tanks and all kinds of other hardware. At the 1963 Toy Fair, Weston pitched his idea to Hasbro's Vice President of Development Don Levine, and the rest, as they say, is history. Weston received $100,000 for the G.I. Joe idea, and Levine ran with it.

Levine coined the term "action figure" for his creation, recognizing the drawbacks to trying to market a boy's doll. The term suited the toy, because G.I. Joe was specifically designed to get into "action-packed" situations. The original G.I. Joe made his debut in time for the 1964 Christmas toy-buying season [source: Hasbro]. He was 12 inches (30 centimeters) tall and had 21 moving parts. Joe's uniforms represented the Army, Navy, Marines and Air Force. As his popularity grew, he was made available around the world with uniforms representing many nations, and he had more equipment than any little boy could play with in a lifetime.

G.I. Joe went on to become a Marvel comic-book character and a movie hero. He continues to be a strong seller today – although mostly in a smaller size than the original – and was inducted into the Toy Hall of Fame in 2004 [source: Toy Hall]. G.I. Joe was also voted the most popular toy of the last 100 years in a poll conducted by the Children's Museum of Indianapolis [source: Weston].

5 Secrets You Didn't Know About Nancy Drew
Winning the Green Windbreaker: Inside the Real World of Pro Mini Golf
How 'Tremors' Graboids Work