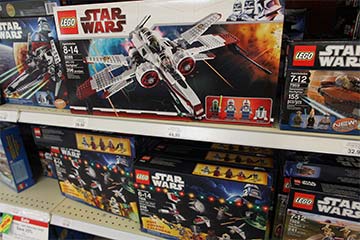 "Star Wars" was responsible for the rebirth of the entire Lego bricks business in 1999, when the company launched Star Wars Lego bricks.
© Ruaridh Stewart/ZUMA Press/Corbis

To understand how "Star Wars" changed the toy industry, we have to go back a long time ago to a galaxy far, far away. During the 1970s, science fiction was unpopular – or at least forgotten as a genre – and the idea of toys based on movies or TV was in its infancy.

But all of that was about to be turned on its head when George Lucas, fresh off the success of "American Graffiti," proposed "Star Wars," essentially a Western set in outer space. It was a bold concept – and one that struggled to find a home. Lucas and 20th Century Fox finally came to an agreement, an unusual one that allowed Lucas to exchange a $500,000 director's salary for the licensing and merchandising rights. It was a decision that would make Lucas wealthy beyond all imagining and change the toy industry forever when Lucas turned his vision to the "Star Wars" toy tie-ins.

Kenner, then owned by General Mills, was the original toy company to license "Star Wars" tie-ins. Kenner was so overwhelmed by the unanticipated success of "Star Wars" and the subsequent demand for the toys following the May 1977 release that they ran out of stock almost immediately. At Christmas that year, they still hadn't caught up. The company issued an "Early Bird Certificate Package," which gave kids what amounted to an empty box with an IOU for action figures that were finally available in the spring. By the end of 1978, Kenner had sold more than 40 million Star Wars action figures for more than $100 million in gross sales [source: Block].

Kenner not only made the toys fun to play with, they made the 3-3/4-inch action figures fun to collect. The original "Star Wars" toys are some of the most sought-after collectible toys, and the phenomenon shows no signs of slowing. In 2001, "Star Wars" merchandise generated $3 billion in sales. In fact, since the 1977 original movie release, more than $20 billion in licensed merchandise has been sold [source: Block]. "Star Wars" is responsible for the rebirth of the entire Lego bricks business in 1999, when the company launched "Star Wars" Lego bricks – the first movie or TV show tie-in for Lego bricks – and the Lego "Star Wars" video game.

And now Disney is taking its turn. In 2012, Disney paid Lucas $4 billion for the "Star Wars" franchise. Since that time, they have sold 10 million lightsabers in a variety of forms every year, a number that will only increase as the December 2015 release date for "Star Wars: Episode VII" nears [source: Graser].

The never-before-seen success of "Star Wars" toys made movie-toy tie-ins an essential part of nearly every film marketing campaign in children's films and in many cases, films for grownups, too. All of those toys can trace their lineage straight back to a visionary who changed not only the movie industry, but the toy business as well.

How 'Schoolhouse Rock!' Works
What was the first circus?
Cartoonist Jack Chick Dies, Having Offended Pretty Much Everyone