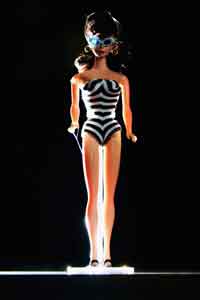 On July 24, 1952, a curvaceous bombshell named L­illi graced the pages of the Germ­an tabloid Bild Zeit­ung for the first time. Created by cartoonist Reinhard Beuthien, Lilli was worldly, single and in search of a rich boyfriend.

Think of her as a modern, working girl version of Scarlett O'Hara in "Gone with the Wind." Deprivations brought on by World War II had worn down her spirit, except for a determination to be amply provided for. Passion no longer motivated dating; she was simply on a quest for the wealthiest suitor. Lilli was, in short, a gold digger -- and an attractive one at that. With mile-long legs, a generous bustline and scant clothing, Lilli charmed the magazine's largely male readership. In fact, her brassy personality and pinup figure wooed men so effectively that the cartoon Lilli was transformed into a doll in 1955.

The Lilli doll, which came in 7-inch (17-centimeter) and 11-inch (27-centimeter) sizes, wasn't marketed to little girls -- it was intended for adult men. At that time, girls played with baby dolls and prepubescent-shaped fashion dolls. Lilli, on the other hand, had big, thickly lined eyes that gazed suggestively to the side. Her crimson lips puckered slightly with a flirtatious pout. Standing in black spike heels, Lilli's impossibly petite feet supported a distinct hourglass frame.

With advertising taglines such as, "Whether more or less naked, Lilli is always discreet," and a wardrobe consisting of negligees, tiny tops and tight pants, Lilli dolls were essentially sex toys. People gave them as bachelor gifts, some men rode around with Lilli on their dashboards, and others bought them just for the cheap thrill out of peeping under her alluring ensembles [source: Lord].

But when an American woman named Ruth Handler spied a Lilli doll in a store while vacationing in Switzerland, she didn't see it as a prurient novelty. Instead, she thought it would be the perfect toy for her daughter, Barbara. Handler had observed Barbara and her girlfriends playing with paper dolls that depicted teenage girls or adult women. To Handler, that was their way of practicing for adulthood. Yet, aside from the two-dimensional paper dolls, no other dolls available in stores portrayed the mature female body. For that reason, she bought two Lilli dolls for Barbara during that Switzerland trip in 1956 -- and one for herself. 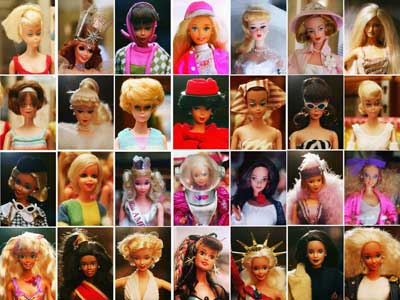 The thought of having a doll with prominent breasts in the home dist­urbed some mothers. Barbie's mature body seemed borderline pornographic and potentially damaging to young girls' psyches (an argument that continues to sizzle in today's culture). After all, if the original Barbie were a person, her measurements would be 38-18-34. In order for Mattel to popularize Barbie, the company had to advertise in a strategic way that would allay concerned mothers' fears.

Over the course of six months, an advertising guru named Ernest Dichter studied the responses of girls and their mothers to Barbie. From his extensive research, Dichter concluded that instead of attempting to mitigate Barbie's mature qualities, Mattel should emphasize them. Since Barbie was well-dressed and attractive, mothers ought to consider her a tool for teaching their daughters about the importance of appearance and femininity. While some women would later take Barbie to task for imparting such lessons, the advertising tactic worked in the 1960s.

Barbie's on-and-off boyfriend Ken hit stores a few years later in 1961. Ironically, Ken is named for Ruth Handler's son, which makes the real-life "Barbie" and "Ken" siblings. (Maybe that's why the two have never married or had a baby.)

The doll underwent a significant makeover in 1971 with the release of Malibu Barbie. For the first time, Barbie's eyes looked straight ahead, rather than to the side, like Lilli's. She traded her honey-brown locks for platinum blonde and displayed an open-mouthed smile that she still wears today. Since 1959, Barbie has also moved far beyond the career ambitions of a teen fashion model. She's held down more than 80 jobs, including paleontologist, astronaut, McDonald's cashier and president.

During her pink-hued reign, Mattel estimates that an average of two Barbies was sold every second across the world. Sales have flagged a bit in recent years as girls opt for more electronic and interactive toys. Since the first official Barbie convention in 1980, Barbie collecting has remained a robust niche. Rare and limited edition dolls, such as the Dolls of the World collectibles, can sell for thousands of dollars.

Having weathered the ever-shifting styles and attitudes of girls over decades, Barbie plans for a major comeback on her 50th birthday. Despite the dip in retail sales, Barbie still isn't hurting for cash. With franchise profits for 2008 topping $1.2 billion, Barbie could set up her old pal Lilli for life.