Graboid Adults and Other Sandworms 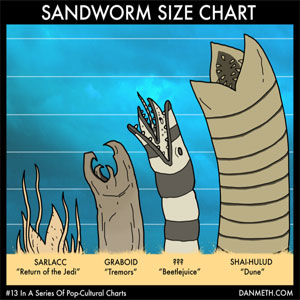 How does the graboid stack up to other sandworms?
Image courtesy Dan Meth

Finally, shriekers develop into egg-producing, winged ass blasters. The crude name, if you're wondering, derives from the creature's ability to propel itself through the air with a rocketlike chemical blast – not unlike the offensive spray of the bombardier beetle.

Both creatures produce hydrogen peroxide (H2O2), as well as substances called hydroquinones that are stored in a separate reservoir. When shriekers or bombardier beetles sense danger, they release the H2O2 and hydroquinones into a special reaction chamber. Here, secreted enzymes break down the H2O2, releasing free oxygen to oxidate the hydroquinones. This chemical reaction generates enough heat to bring the entire mixture to a boiling point. With an explosive discharge of fluids, the bombardier beetle sprays its attacker, and the ass blaster launches itself off the ground in flight.

The ass blaster exists as the graboid's reproductive form, and while it stands alone as Earth's only mollusk capable of flight, it follows an overall trend. Termite kings and queens, for instance, feature wings to travel beyond the limits of their birth mound and populate new regions. This is precisely how Nevadan graboid populations are thought to have so quickly spread to deserts throughout North and South America.

So the ass blaster uses its unique combination of rocket propulsion and gliding to range far from its birthplace in search of new habitats. On arrival, it lays a cache of graboid eggs in the earth, which begin the cycle all over again. The entire graboid life cycle works out like this:

As this page's illustration demonstrates, the graboid is far from the universe's only sandworm species. In 1988, NASA's exploratory Beetlejuice probe discovered a species of gigantic, striped sandworm in the deserts of Saturn's moon Titan. Additional space probes have spotted sedentary sarlacc worms that exist more or less like titanic antlions. Most impressive of all, however, is the enormous Shai-Hulud of Arrakis, a desert planet some 310 light-years from Earth [source: Grazier].

For now, however, sandworm enthusiasts will have to make do with Earth's own man-eating, subterranean horrors.

According to legend, a 5-foot (1.5-meter) long sandworm haunts Mongolia's Gobi Desert. Initially, the creature sounds somewhat like an Asian cousin of the North American graboid, but even cryptozoologists are doubtful. Richard Freeman of the Centre for Fortean Zoology believes that, if the creature exists, it may actually be a legless lizard [source: Mongbay].