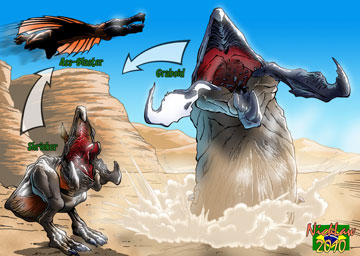 Not all sand-loving predators are gigantic monsters. Small, segmented worms such as the king ragworm (Alitta virens) live their lives in wet sand. The larval antlion digs a funnel-shaped pit and waits buried at the bottom to feast on insects that stumble into the trap.

Just as the antlion is but the larval form of a winged adult, graboids also undergo metamorphosis into drastically different forms.

Graboids eggs can rest dormant in the Earth for an extended time but eventually hatch into an immature, or nymph, stage known as a shooter. Shooter graboids roughly resemble the larger larval form, only much smaller and capable of launching themselves out of the ground at prey.

Shooters quickly develop into fully grown larval graboids, but this isn't the end of the creature's development. The larval form eventually matures into a cache of three to 12 bipedal shriekers. This stage in the creature's life cycle is particularly interesting as no other terrestrial organism develops from a single larval organism into multiple adults. Plus, while larval graboid morphology resembles that of invertebrate mollusks, shriekers cast a decidedly avian appearance.

As a general rule, mollusks don't have legs, but two species of tropical octopus do display bipedal behavior. For example, the coconut octopus (Amphioctopus marginatus) often wraps six of its eight tentacles around its body and uses the remaining two appendages to "tiptoe" across the seafloor [source: Sanders]. Still, the shrieker certainly takes mollusk bipedialism to a far greater extreme.

Shriekers rarely grow larger than 3 feet (91 centimeters) in height, but make up for their diminutive size through organized pack hunting. Their heads resemble those of the subterranean graboids, only they boast just a single prehensile tongue and unfold a frilly, heat-sensing organ from their heads to identify prey.

While shriekers can't lay eggs, they do possess an astonishing ability to reproduce asexually. When properly nourished, the creature vomits up a shrieker fetus that quickly matures. This ability may explain the larval graboid's ability to spawn more than a dozen shriekers: Even before it emerges from the husk of its larval form, the graboid begins to engage in asexual reproduction -- the exact output dependent on nourishment.

If that sounds alien (and gross) to you, just consider the parasitic mite Acarophenax tribolii, the offspring of which reach sexual maturity before birth. The male fertilizes all of his sisters and promptly dies, while everyone is still inside the mother's bloated body [source: Taylor].