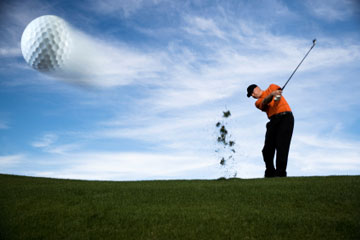 The stack and tilt swing caused quite a stir in the golf community.
©iStockPhoto.com/davejkahn

In June 2007, Golf Digest readers pushed back their visors and scratched their heads as they read about a new golf swing growing popular on the PGA Tour. The swing seemed to run counter to the sport's conventional wisdom, particularly with respect to weight shift and lateral movement. Not only that, it looked downright odd, as if you stood a chance of falling over while attempting it. Nevertheless, pros were flocking to it and reporting significant improvements in their games. It was called the stack and tilt swing, and it was developed by well-known PGA Tour instructors Michael Bennett and Andy Plummer.

Stack and tilt is a swing designed to maximize how straight and how far the ball flies. Some swings -- for example, the putt -- will be straighter. And others may drive farther. But stack and tilt is meant to be the best combination of both. It keeps you on the fairway while helping you to gain enough distance to keep your score low.

Interest in stack and tilt rivaled that of any instructional article Golf Digest had yet published, and the magazine reported receiving hundreds of questions and comments [source: Finch]. Many people said they had markedly stepped up their games with the new swing, while others were "simply intrigued by its complete assault on traditional instruction" [source: Plummer]. Critics weighed in as well, claiming that the new swing was little more than an update of the old "reverse pivot" and argued that the stack and tilt was too tricky for most weekend golfers [source: Logan].

In this article, we'll look at how stack and tilt works and how it differs from the traditional golf stance and swing.

As with nearly any sport, the goal of golf is to get the ball somewhere useful. And that means developing a technique that will breed consistency. Golfers are at a disadvantage in this pursuit because golf's fundamental movement, the swing, requires taming numerous instabilities in human body movement. In short, it plays to our physical disadvantages.

Over the years, numerous approaches to developing consistency, stability and power have been advanced and refined, ultimately giving rise to the idea of "golf fundamentals" -- particulars of grip, stance, posture, ball position and alignment taught to every novice. Yet, as PGA Tour instructors Michael Bennett and Andy Plummer watched the most successful golfers in the world, they noted little commonality among them with respect to any of these elements [source: Plummer].

This realization inspired them to look at what the golfers did share in common. They realized that it boiled down to two things: an ability to consistently control where the club hit the ground and the ability to hit the ball far enough downrange to score low. Beyond that were idiosyncrasies unique to each golfer -- how he or she holds the club, where he or she aims the club face, how he or she positions the ball, where he or she aimed [source: Golf Life Television].

With this in mind, Bennett and Plummer developed a swing that would increase consistency for the golfer and make the ball fly straight and far. With the stack and tilt swing, the golfer's weight remains "stacked" on the front foot throughout the swing while his or her back "tilts" forward to keep the spine and shoulders over the ball [source: Logan]. This differs from the traditional swing, in which a golfer's weight shifts from front to back during the backswing, and then forward on the downswing. The traditional swing also has much more lateral movement in the hips and shoulders. And whereas most magazines, books and television shows instruct golfers to maintain the same spine angle throughout their swings, Bennett and Plummer argue that the key is to maintain a consistent inclination. In the stack and tilt, the spine actually adjusts its tilt during the swing. It must rotate while remaining at a constant inclination [source: Golf Life Television].

In the next section, we'll break down the stance and swing in more detail.

A solid stance is the foundation of an effective swing. The purpose of the stack and tilt stance is to maximize the golfer's ability to consistently control where the club hits the ground [source: Plummer].

Here's how you do it: Stand centered over the ball with your shoulders aligned with your hips. Flare out your feet and tilt your chin down toward the ball. Keep the majority of your weight -- more than 50 percent -- on your front leg throughout the swing.

As you begin your backswing, swing your hands inward, using your turning body to create an inside swing path. Your hand remains "packed in" throughout the swing. Turn your shoulders in a circle and tilt your spine toward the target, creating a steep downward angle with your shoulders vertically aligned over the ball. Stay over the ball. Do not shift your shoulders or hips back (this is probably the most noticeable difference for most golfers).

As you begin your downswing, keep your hips tucked underneath, lean a bit more into your front leg, straighten your back leg a bit and flex your front knee to set up the downswing thrust. You should feel like you are swinging down on the ball, not laterally through it [source: Finch]. Keeping your head still on the downswing, slide your hips forward and flex your torso forward as well, so that your spine tilts away from the target. Spring up on the ball as you release your hips from their address tilt and don't let your head go forward. Your shoulders should be square at the point of impact. The effect will be to push up and through (note that your belt is nearly level and much higher than in a typical swing).

Finish the motion, continuing to push the hips forward and extend the spine, shifting 90 percent of your weight onto your front foot. Stretch out your arms to complete the swing. When practicing, try ending your swing halfway, with your arms held parallel to the ground, to habituate yourself to the feeling of extension [source: Finch].

Now that you know the basics of the swing, let's take a look at why stack and tilt is worth learning.

Benefits of the Stack and Tilt Golf Swing

The benefits of Stack and Tilt are easiest to see when comparing the swing to a more traditional approach [source: Plummer].

Peter Finch, senior editor of Golf Digest, reported hitting the ball at a lower angle and about 10 yards farther than usual. He said that his shorts were closer to dead center on the clubface and that he felt a "noticeable difference in compression" [source: Finch]. Still, there is no substitute for the hands-on approach, so why not give stack and tilt a try for yourself?