Sabermetrics 101: Measuring the Value of Players and Coaches 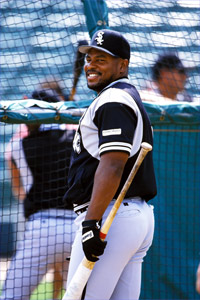 Would Belle have won the MVP award over Gonzalez if sabermetrics had been used to evaluate player performance?
Allen Kee/WireImage/Getty Images

­In 1998, Juan Gonzalez won the American League MVP award, but in many categories, including James' runs created stat, he trailed Albert Belle. However, Gonzalez's Texas Rangers finished first in their division, ahead of Belle's Chicago White Sox. So did Belle, who finished eighth in the voting, deserve the MVP award? Was he more valuable than Gonzalez? Maybe, but defense also counts, and the writers who vote on the award generally prefer players who perform well for teams that make the playoffs versus those that excel on poorer teams. And despite being a great player, Belle's fiery personality often worked against him in the eyes of the press.

The same year, pitcher Rick Helling, a teammate of Gonzalez, tied for the league lead with 20 wins, despite having a mediocre 4.41 ERA. (His overall record was 20-7). Roger Clemens finished the year at 20-6 -- just one less loss -- yet he won the Cy Young Award as the American League's best pitcher. But that's because he led the league with a 2.65 ERA and had a league-best 271 strikeouts (compared to Helling's 164).

Both of these examples highlight some of the problems with traditional statistics that we just mentioned. Often in who-deserves-the-award debates, people casually throw around statistics that may not best indicate a player's skill or value. Sabermetric measurements aim to fill in these knowledge gaps. Some are rather basic, like WHIP -- walks and hits per inning pitched -- which measures how many base runners a pitcher allows.

A good WHIP is generally around 1.30 or below, with anything close to 1 or below it being considered spectacular

­On the next page, we'll look at some of the more complex sabermetric stats, but first we'll consider how sabermetrics is useful in answering seemingly subjective or unanswerable questions.

For 15 years, Leo Mazzone was pitching coach for the Atlanta Braves. Mazzone was considered one of the best pitching coaches around as his pitchers were usually among the top in the league [source: Schwarz]. His ability to resuscitate the careers of struggling pitchers or those recovering from injuries was particularly admired. But was Mazzone good or just lucky, the beneficiary of having talented pitchers signed to play for the team?

­J.C. Bradbury, an economics professor, analyzed the ERAs of pitchers playing for Leo Mazzone and when they weren't with Mazzone. He accounted for factors like age (since pitchers are generally better at certain points in their careers) and ballpark (some ballparks are bigger and easier to pitch in than others). He found that pitchers under Mazzone had an ERA that was lower by 0.62, a dramatic and valuable difference [source: Schwarz]. Others analyzing Mel Stottlemyre, who has been a coach for the Yankees, Astros and Mets, found that his pitchers had ERAs 0.30 lower under him [source: Schwarz]. In the studies, the authors acknowledged that some other factors, like good personnel decisions by the general managers, may contribute to these coaches' successes. But some of Mazzone's coaching practices may also help, like having his starting pitchers throw twice between starts instead of once, which is common practice.

In Sabermetrics 101: The Objective Analysis of Baseball, a course offered by Tufts University, students read books by and hear lectures from many sabermetric luminaries.