The Problem with Traditional Baseball Statistics 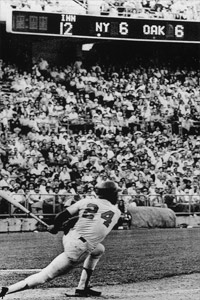 You can use sabermetrics to see how some of today's stars measure up to all-time greats like Willie Mays.
­­Getty Images

­Like a player's RBI record, batting average -- the number of hits divided by the number of at-bats and the most common measure of hitting ability -- can be misleading. If you only look at batting average, then you're ignoring how the player­ contributes to a team's offense in other ways, like earning a walk or hitting for power.

Stats like the number of hits aren't that straightforward either. If a player has 2,300 hits in his career, that's generally considered quite good. But what if the player simply managed to play a long time and his career batting average was .260 with few extra-base hits (doubles, triples, home runs)? He still had a great career, but was probably less valuable than a player who played for less time and accumulated the same number of hits with a higher average and more extra-base hits. Then again, what if the former player was among the top defensive players?

If judging a player in the context of history, consider also that some periods in baseball have been known as more favorable to hitters or pitchers, just as some parks now, by virtue of their dimensions, altitude, wind and other factors, produce higher or lower run totals than the league average. The period from about 1900 to 1919 was called the Dead Ball Era because of, among other things, the type of baseball that was used, which was soft, and hitters used heavier bats. Also, the popular hitting style of the day -- placing one's hands high on the handle of the bat -- tended to produce fewer extra-base hits. Sabermetricians have produced formulas in an attempt to produce more objective judgments of players' abilities throughout the various eras of baseball.

For example, to judge batting ability, Bill James proposed a mathematical formula to determine how many runs a hitter creates because, in the end, runs are what count [source: Albert]. James devised the runs created statistic, which goes:

Another problem with traditional statistics is that not all outs are equal. The way in which a batter makes an out can affect the outcome of an inning. Say there's a runner on second with one out. If the batter at home plate strikes out, nothing happens (unless the runner decides to steal a base). But if the batter hits a slow roller to first base and the runner manages to get to third while the batter is being tagged out, then the batter made a more useful out.

With pitching, wins are highly dependent on amount of runs a team scores for their pitcher. A good pitcher might have an ERA (earned run average) of 3.50, meaning that he allows, on average, 3.5 runs per game. But if his team's offense only averages 3 runs during his starts, then that pitcher will have a very poor win-loss record that doesn't accurately reflect his performance. Conversely, good run support can make a bad pitcher look better than he is.

­ERA can be inflated by poor defense. Although runs caused by errors don't count against a pitcher's ERA, some pitchers have the disadvantage of playing in front of defenses that, while not necessarily committing a lot of errors, don't have the range and effectiveness of other teams' defenses. For example, a player may get to a ball but have a weak arm and not throw the ball quickly enough to get a runner out. This situation could cause runs to score, and the pitcher would be credited with giving up the runs since technically no errors were committed.