How to Become a Precision Driver 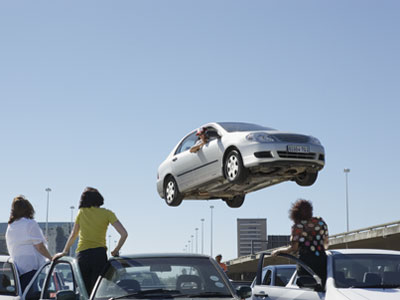 The driver of this car puts the precision in precision driving.
Martin Barraud/Getty Images

There isn't one path to becoming a precision driver. If you're interested, you can sign up for one of the many precision driving schools all over the world. The classes generally run three to five days and cover the maneuvers most often used in film production, such as the following:

These are just a handful of the moves a precision driver must master. Driving schools charge anywhere from a few hundred to several thousand dollars, and you typically get what you pay for. They can't place you in jobs, but you can make relationships that might lead to work. The same thing holds true for pretty much any freelance film professional -- you are your own boss and the only way to get jobs is to meet the people that hire or get recommended by someone.

In order to work on union commercials and films, a precision driver needs to be a member of the Screen Actors Guild (SAG) or the American Federation of Television and Radio Artists (AFTRA). Even if the face of a precision driver is never seen onscreen, he's still paid as onscreen talent at SAG rates. This means a minimum day rate of about $500 for 10 hours of work before overtime kicks in. The hours count from the time the driver is required to be at the location until they're released by the AD, not the hours behind the wheel. In fact, the vast majority of time is spent waiting for the driving sequences to be shot.

Precision drivers, like regular actors, also get residual payments if they work on a commercial or TV show that's shown multiple times. And stunt driving requires additional money in the form of a higher rate or pay bumps, depending on the level of difficulty or danger. This is typically determined by the stunt coordinator and can be negotiated by the driver.

But it's not about the money. A driver who works a lot can make well into the six figures, but a small percentage of drivers get the bulk of the work. The others do it because they love driving, and let's be honest -- where else can you perform a 180-degree slide between two parked cars without getting arrested? Most precision drivers are car junkies who live on adrenaline. That's not to say that they live for danger though -- their job is to avoid danger and be in control at all times.

Not all jobs require chases and skids. The word precision really says it all. It's more about working in concert with the camera or camera car that's following you. Oftentimes, it requires landing the car on an exact mark so the camera can film it from dead center. Start paying attention to car commercials and see if you ever notice a slide into a stop that's off-center or askew. Dozens of people work hundreds of hours to make sure that nothing is ever off by even one inch.

You might be cut out for a career as a precision driver if you're young, fit, have exceptional driving skills and you're less than six feet tall. Why? Most of the actors you'll be doubling are young, fit and many of them aren't exactly giants. Plus, being smaller in a commercial picture car means the interior looks roomy and spacious. And that helps sell cars, the only objective of any car spot.