Precision Driving: On the Set 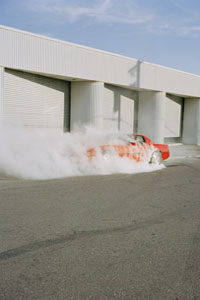 Somewhere in this haze of smoke, a precision driver performs a wicked burnout.
Kai Wiechmann/Getty Images

The first step, whether it's an off-road vehicle ad campaign or a car chase for TV or film, is to determine if a precision driver is needed. This is determined by the production team, more specifically the assistant director (AD). The job of the AD essentially is to manage the shoot, from soup to nuts. This includes ensuring the safety of the cast and crew, first and foremost. At the beginning of the pre-production process, the production manager gets storyboards from an artist hired to put the concept of the commercial spot or movie scene on paper. Storyboards are basically sequential drawings of each shot the director needs to cover in order to edit it together as a single fluid piece.

More complicated jobs, especially chase scenes, require a stunt coordinator. The low-key jobs can usually be planned out between the driver, the AD, the director and the director of photography (DP). This team will spend hours, days and even weeks planning out the shots they need, depending on how complicated the job is. Oftentimes, the cars also are rigged with mounted cameras for interior shots or multiple angles. This is where the key grip comes into play. The grip department is in charge of safely mounting the cameras onto the car, and it's an important job. A 360-degree spin is no good if the camera flies off the car and smashes to pieces. Of course, it's Hollywood, so if this happens another camera is brought in and they'll give it another go.

Any car maneuver performed by a precision driver can be dangerous business. This is when the production assistants (PA) jump in. PAs are the unsung heroes of any film set. They've got the entry-level position on a film crew and they're the first to arrive and the last to leave any set. PAs, under the direction of the AD, second AD and sometimes third AD, are responsible for something called "lockup." This is the process of ensuring that everybody is where they're supposed to be and that no one is somewhere they shouldn't be. Each street corner is manned, and PAs are responsible for holding pedestrian traffic from walking into a shot and into harm's way. Auto traffic requires the help of hired off-duty police officers. Permits are required to lock down any street, much to the dismay of commuters in cities like Los Angeles and New York.

Because of the dangers involved in a precision driving stunt, the AD is required by the Director's Guild Association (DGA) to cover specific safety measures with the entire cast and crew before a stunt is performed. Any concerns are brought up during this meeting, and the shot won't happen until the AD is convinced that it can be performed without a hitch.