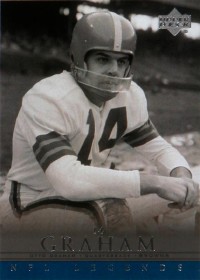 Otto Graham retired from pro football in 1955, yet many of his career statistics still rank with those numbers of the top passers of all time.

Considering how rule and strategy changes favor more modern passers, Graham's marks are truly remarkable. And yet, if the sign of a great quarterback is not his personal statistics but his ability to win, Otto Graham was the greatest quarterback pro football has ever seen.

Graham (born 1921) had been a fine single-wing tailback at Northwestern University, where he also starred on the basketball court (he even played pro basketball for two seasons). In the 1943 Chicago College All-Star Game, he returned a pass interception 97 yards for a touchdown to seal a victory over the pro champion Redskins.

While at North Carolina Pre-Flight during World War II, Graham was approached by Paul Brown, who was scheduled to coach the Cleveland entry in the AAFC, a new league set to oppose the NFL in 1946. Brown wanted to use Graham as his T-formation quarterback. In their inaugural season, the Browns won their first of four straight AAFC crowns, and Graham proved himself master of his new position.

All-league nine times, Graham was at his best under pressure, accounting for 10 passing touchdowns and five rushing TDs in six NFL championship games. He was sometimes called "Automatic Otto," both as a tribute to his many smooth performances and as a sly dig at Paul Brown's system of calling plays from the sideline years before it was fashionable to do so.

But even the harshest critics couldn't argue with his success. Graham's pinpoint passing, slick ball-handling, and steady leadership kept Cleveland at the top of the standings for 10 straight years "Otto-matically." He was named to the Pro Football Hall of Fame in 1965.