"MythBusters": Behind the Safety Screen 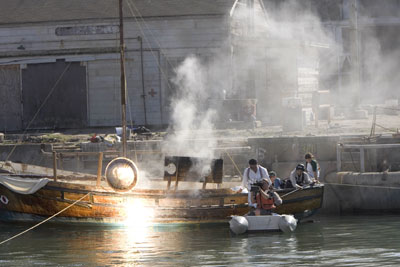 Each "MythBusters" show is an hour long, and a lot of work by a lot of people goes into completing a 30-episode season. The show is distributed and broadcast all over the world by Discovery Channel, but the show itself is produced by an Australian company called Beyond Productions. Executive producer Dan Tapster oversees a crew that totals 45 people -- 25 that work on location in San Francisco with the remaining 20 in Sydney.

The shooting schedule is arranged a little bit like a year-round school system. They shoot for 10 to 11 weeks in a row then get a couple of weeks off, with additional break time in the summer. For each episode, the camera crew shoots about 25 hours of first unit tape with Sony XD high-definition cameras. This is the primary footage of the principal cast busting myths. The second unit camera team shoots another 30 hours of B-roll. This is the additional footage that fills out the episode -- time-lapse photography, shots that establish the locations and the numerous mini-cams that are mounted inside and around each test site. High-speed cameras are used to capture every test in super slow-motion.

How does it all come together? By fostering a highly collaborative atmosphere. Dan Tapster gets the ball rolling with a rough outline on how to approach an episode, and then the rest of the team joins in with ideas and suggestions in brainstorming sessions. Depending on the schedule and the level of difficulty, a myth can take from a couple of days to a month to plan. The most difficult myths are earmarked well in advanced to make sure the crew can pull it off. Jamie and Adam often play devil's advocate with each other to try and cover their bases. Finding holes in their ideas is a great way to identify and solve problems. While the tests themselves are a lot of fun to perform, the MythBusters admit that it's the brainstorming process that really gets their juices flowing. Most of the ideas for the myths come from the "MythBusters" team, but unlike any other show, roughly 25 percent of the story ideas actually come from curious viewers.

If it feels like Jamie and Adam are natural and off-the-cuff, it's no accident. They improvise their own dialogue and pride themselves in really getting into each story. There's a research team that puts in a lot of hard work, but Jamie and Adam do a great deal of the research themselves -- after all, they're the ones responsible for busting and confirming every myth. Each show generally takes six to 10 days to film, but it varies depending on the complexity and schedule.

When you see the MythBusters crash trucks into each other or blow up cars in the pursuit of a bust, it may seem like their resources are unlimited. But the show does, in fact, need to stay on budget, and Jamie and Adam enjoy the challenge of doing something as simply and inexpensively as possible. In order to pull this off, the MythBusters require a lot of help from a wide variety of professionals and organizations. It was more difficult early on, but the show's popularity has gained them fans from all walks of life, and it seems like everyone wants to help the MythBusters. Everyone from weapons experts to the F.B.I. and U.S. Coast Guard has chipped in to help bust or confirm myths in the name of science.

For more information on urban myths and science, please stop mixing the ballistics gel and visit the links on the following page.