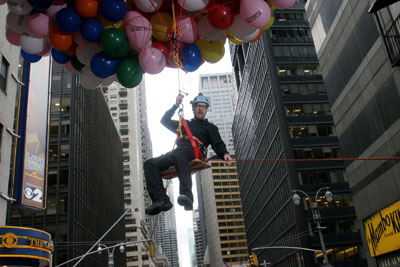 MythBuster Jamie Hyneman started M5 Industries on his own before his career took a left turn at Discovery Channel, and he somehow manages to maintain it despite the breakneck shooting schedule he faces. The shop serves as the build zone and testing ground when the myth can be contained inside the warehouse walls. Many times, the gang has to go off-site in order to blow up or crash something large or dangerous, but the M5 parking lot has also seen its share of pyrotechnics.

At one point there were three buildings -- M5, M6 and M7. After disturbing some quieter neighbors in their industrial park, M6 closed shop, and now the more private M5 and M7 serve as the show's home. M5 is where Adam and Jamie get most of their work done, and it also houses the studio set where they begin and end each show. If some messy testing needs to go down, it happens at M7.

The M5 shop is packed to the gills with props from the 300-plus myths the gang has put to the test. Just don't try and find the original rocket car from the pilot episode -- Jamie sold that one after thinking "MythBusters" may not be in for a long run. Aside from being an unofficial "MythBusters" museum, M5 is a working shop, so there's virtually every kind of tool on the planet to help the team accomplish whatever they can dream up. There are metal lathes, a welding station and every kind of tool, nut, bolt, screw and material you could think of. There's an old card catalog full of small motors and a computer-controlled milling machine that does all the cutting automatically. There's also a cache of safety and rigging gear to make sure everyone walks away from each test unscathed. Throw in some crash test dummies, models and heavy machinery, and you have the means for some serious myth busting.

Jamie and Buster test whether or not punching a shark in the nose will send it swimming off (plausible.)
The Discovery Channel

In the next section, we'll pull back the safety screen and see what goes into making a "MythBusters" episode.

You can't talk about "MythBusters" without mentioning ballistics gel. It's as much a part of the show as Buster the crash test dummy. Ballistics gel is a gelatin mix the MythBusters use to simulate human flesh. When a pig carcass just won't do, the gang mixes up a batch of ballistics gel from its original powdered form, adds an anti-foaming agent, packs it in ice, throws in some preservative and molds it in the shape of a human bust. From there, the jiggling faux-human is typically shot in the face with something to see how a real human would be affected -- silver bullets, chunks of car tire, playing cards, you name it. The MythBusters aren't shy about pounding their ballistics dummy with shrapnel.

What's so special about this gel? It's the density. Ballistics gel isn't like the boxed Jell-O you have gathering dust in your pantry. It's much thicker and comes as close to approximating the density of human flesh as it can get. Sometimes, the MythBusters even add some animal bones or a spine to see what kind of bone damage can be inflicted. If you shoot a ballistics gel dummy with a hollow-point bullet and it penetrates the chest, severs the spine and exits through the back, you know you have one destructive piece of ammunition on your hands.