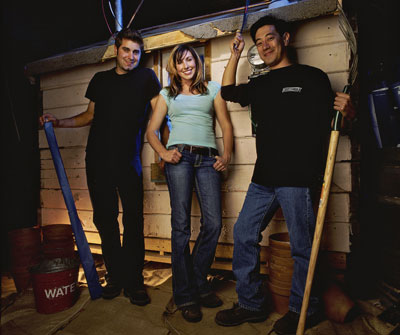 The lead busters may be Jamie and Adam, but they wouldn't be where they are without their build team.

A Bay-area native, Kari Byron graduated from San Francisco State University and traveled the world before beginning a career as a sculptor and painter. She also worked as a model maker and toy builder, which led her to M5. Her debut in one of the early episodes of "MythBusters" was slightly odd to say the least. It was for the myth that a sudden drop in an airplane's pressure could cause a vacuum effect and suction someone to the lavatory toilet. Jamie and Adam needed a model to make a realistic mold of the human backside for testing purposes and Kari stepped up. After that, she made sporadic appearances until her more visible role as a member of the on-camera camera team in the second season.

Tory Belleci is another San Francisco State graduate. He worked as a stage manager with Jamie after graduation, then got a job at director George Lucas' special effects company, Industrial Light and Magic ( ILM). At ILM, Tory built models for the first two "Star Wars" prequels, "The Phantom Menace" and "Attack of the Clones." After eight years at ILM, Tory met up with Jamie again at M5 and was hired to work behind the scenes on "MythBusters." Along with Kari, he became a part of the on-camera team during season two.

The final build team member is Grant Imahara. Grant is a Los Angeles native and USC graduate. He's billed as an electronics and radio-control specialist and his resume does nothing to disprove it -- he was one of the controllers for the R2-D2 model for "The Phantom Menace." While working at ILM as a model maker and animatronics engineer, he also worked on movies like "The Lost World: Jurassic Park," "Terminator 3: Rise of the Machines" and the last two "Matrix" films. Grant joined the "MythBusters" team in 2005 after an invitation from Jamie.

The build team has done everything from testing whether a snow plow could blow a passing car from the road (busted) to sending a school bus behind the path of a passenger jet engine to see if it could be blown off the ground (confirmed). Having such a cool job comes at a cost though -- just ask them about the water torture test. Tory and Kari both confirmed that having cold water dropped on your forehead would eventually make anyone talk (confirmed).

In the next section, we'll take a peek inside the "MythBusters" playground -- the M5 shop.

Sometimes once just isn't enough. Over the years, MythBusters has revisited experiments when the first results weren't conclusive. Other times, viewers or the MythBusters themselves dreamt up a better or more fun way to test something. So far, there have been five "" episodes, with a total of 24 myths re-opened. Many of the myths were retested with variations, so it's tough to put the results side by side. Most were re-busted, with only a few being deemed plausible -- none were reversed from busted to confirmed.

While the MythBusters occasionally get criticized by armchair scientists, they're the first to admit that they aren't scientists and do the best they can to entertain and carry out legitimate experiments. They've also confirmed that they've been largely embraced by the scientific community for putting science and experimentation in the limelight.