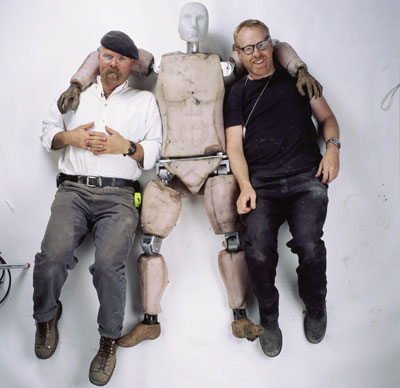 Jamie and Adam get cozy with "Buster" the crash test dummy.
The Discovery Channel

You can call Jamie Hyneman and Adam Savage a lot of things -- model makers, prop builders, machinists or TV personalities. What they are in real life is what you see on camera -- curious, inventive thinkers with a little kid mixed in for good measure.

Adam Savage was born and raised by a filmmaker/painter father and psychotherapist mother. He worked as a child actor in TV commercials and music videos until he was a teenager. Since then, Adam has been an animator, toy designer, carpenter, graphic designer, projectionist, scenic painter, stage designer and welder. Little did he know that all of these jobs would one day aid him in his career as a MythBuster.

To make sure that he stays true to his personality on the show, Adam pretends the camera is his wife and he's telling her the details of his work day. This may be the reason that his quirky, humorous and sometimes mischievous personality so easily invites itself into living rooms each week. In his trademark black horn-rimmed glasses, red hair and goatee, Adam smacks of the guy you got paired with in science lab -- you didn't realize how cool he was until you got to know him.

Hyneman has worn quite a few hats in his life besides his signature beret. He's a master diver, wilderness survival expert, animal wrangler, chef and linguist. He holds a degree in Russian language and ran a diving and sailing expedition business in the Caribbean. You could certainly call him a jack of all trades, and maybe a master, too. After he moved from the Caribbean, Jamie worked in the visual effects industry, where he managed crews building models and crafting special effects for TV commercials and movies. Once he made his mark, Jamie opened up his own shop -- M5 Industries Inc.

MythBuster Jamie Hyneman drives his yellow surfboard/hover craft with fans attached to the front and rear of the board at Ocean Beach.
The Discovery Channel

Hyneman is a little quieter, the "straight man" to Adam's court jester. Jamie's uniform consists of a shaved head, the black beret, a white oxford button-down and wire-rimmed glasses. And of course there's the mustache. You can't describe Jamie without mentioning his large, walrus-style mustache. Jamie's deadpan personality and deep voice contradict his subtle sense of humor.

Jamie met his future co-host in 1993 when Adam was working in theater, building unique props for stage productions in the San Francisco Bay area. Jamie got word that Adam was someone he should meet. So they hooked up. Adam showed off some of his "toys," and they hit it off immediately. Jamie hired Adam to work with him as a model maker, and they went on to collaborate on more than 100 commercials.

In 2002, producer Peter Rees came up with the idea for "MythBusters" and spent six months looking for a host. Rees had interviewed Jamie five years earlier about a robot he and Adam built for the original "Robot Wars" TV show. Jamie seemed like a good choice, so Rees called him up and asked if he'd be interested in hosting a new show that debunked myths with science experiments. Jamie's instinct was that he wasn't right for the part as a solo host, but suggested that he and Adam work as a team. The pair shot and edited a 14-minute audition tape for Rees, who uttered the words, "You're just the geeks we're looking for." The rest is myth busting history.

Grab your fire extinguisher and goggles and click forward to the next page where we'll learn about Kari, Tory and Grant.

Download the official "MythBusters" app for the iPhone and iPad to to chat with other "MythBusters" fans, play games, watch video and see the latest news from Jamie and Adam.