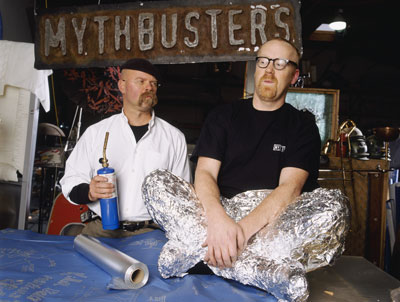 Did you know that if you dropped a penny from the Empire State Building, it would penetrate someone's skull? Or that a daddy long-legs spider is the most venomous arachnid, but its fangs aren't large enough to pierce human skin? Or that if you swallowed Pop Rocks candy with soda, your stomach would explode?

While it's impossible to find out the origins of these and other urban myths, you can't argue that they don't get around. We've all heard them, from lightning striking a tongue piercing to cockroaches surviving a nuclear holocaust. And you can always bet that the person telling you heard it from a friend or relative of the actual source.

But not all urban myths are actually myths. If only someone could put some of these stories to the test and get to the truth of the matter. Enter "MythBusters." Every Wednesday night on Discovery Channel, hosts Adam Savage and Jamie Hyneman test the limits of human ingenuity and sometimes even their own bodies to get to the bottom of some of the most well-known urban myths. The cast is rounded out by the "build team" -- Kari Byron, Tory Belleci and Grant Imahara.

Over the course of 100 episodes since 2002, "MythBusters" has declared more than 300 myths confirmed, busted or plausible. (For the record, the above myths were all busted.) They've blown up, shot up and drowned everything from a hot water heater to a young fan's parent's car in the process. But "MythBusters" isn't all about destruction -- it's just a perk of the job. Jamie and Adam, along with their partners on the build team, use the scientific method to conduct controlled, albeit sometimes messy, experiments. The original idea was to have fun and educate -- to have science meet entertainment.

The business of busting myths has proven to be popular. "MythBusters" quickly became one of Discovery Channel's highest-rated shows with more than 10 million viewers tuning in worldwide every week. Each episode typically tackles between two and four myths, usually within a related topic. There are also themed episodes -- the "mega-movie" busts, the pirate show, a set of experiments based on the movie "Jaws" and the popular viewer's choice shows. "MythBusters" popularity even got Adam and Jamie a cameo on the hit forensics drama "CSI: Crime Scene Investigation."

In this article, we'll bust "MythBusters" wide open -- the team, the equipment they use and how the show is produced.

"MythBusters" producer Dan Tapster for his assistance with this article.