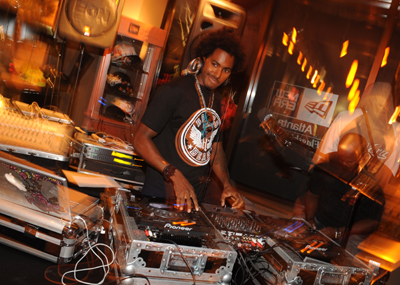 Many DJs use virtual DJ decks, a software representation of a traditional DJ rig. DJ Drama performs at a party.
© Rick Diamond/Getty Images

There are three major kinds of music mixing software designed to meet the needs of different kinds of loop-based musicians.

For DJs, who create most of their music during live shows, the simplest solution is a virtual DJ deck. A virtual DJ deck is a software representation of a traditional two- or four-deck DJ rig. On a traditional vinyl DJ rig, there are two or four playback decks for records. The DJ makes his music by switching back and forth between the loops from one record and the loops from the other records. He can also create deep dance tracks by layering many loops on top of each other.

The most prized skill of a vinyl DJ is the ability to beat match loops from two different records. If one loop plays at 120bpm (beats per minute) and the other at 138bpm, then it's the DJ's job to slow down the second record by pitch-bending it by ear.

Virtual DJ software makes beat-matching obsolete. All of the music has been converted from vinyl records to MP3s. The software can easily sync the playback rate of two loops or sync the entire library to match the tempo of the current track. Even better, the musician can now change loop playback speeds without distorting the pitch of the music. No more "chipmunks effect" when a record is sped up to match another track.

But DJ software goes far beyond the capabilities of traditional DJ rigs. In addition to old-school scratch and stutter effects, virtual DJ software offers tons of digital effects that can be assigned to control knobs or activated from the computer screen. DJs can search through thousands of loops, preview them quickly in their headphones and drop them into the mix with the confidence that the new loop will be in perfect sync with the music. And if nature calls in the middle of a set, they can press the shuffle button and let the software take over.

The second type of music mixing software is a hybrid between a timeline-based DAW and a non-linear, loop-based mixer. With this kind of hybrid software, a musician can first record a complete song on a linear timeline like he would with a traditional DAW. He can then use the software to break each track down into dozens of standalone loops. When it's time for a live performance, the musician doesn't have to play the song back exactly as it was recorded in the studio. He can use a special loop view in the software to toggle back and forth between the different components of his song, essentially making a real-time remix.

This is the nature of non-linear composition. Instead of being tied down to a timeline or a traditional song structure (verse, verse, chorus, verse, bridge, chorus, et cetera) the artist can call up different musical elements with the click of a mouse or the press of a button. He can tweak loops with distorting, bending and stuttering effects. And with the magic of MIDI (Musical Instrument Digital Interface), he can even switch the playback instrument of any loop in mid-stream.

The third type of music mixing software is a plug-in that's used in conjunction with a powerful DAW like Pro Tools. These plug-ins work much like the hybrid music mixing software. First, the musician records the song in Pro Tools. Then, using the plug-in, he can isolate any of the Pro Tools and slice the tracks into loops. Once the tracks are isolated as loops, he can assign each loop to a different control key, rearrange and combine sounds, apply tons of effects and re-mix the original Pro Tools song on the fly.

In the next section, we'll review some of the most popular titles for each of the different kinds of music mixing software.