Is there a better way to track box office numbers? 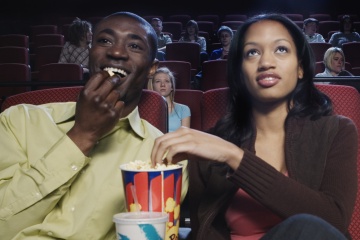 With the variation in the price of movie tickets from theater to theater and city to city, the box office revenue might not be the most accurate measure of success.
Fuse/Thinkstock

Critics say there must be a better measure of box office success than total dollars earned. The average price for a movie ticket was $8.17 in 2014, but that takes into account both low-cost matinees and high-priced 3-D movies [source: Lang]. In New York City, tickets can cost nearly double the national average. If one ticket is clearly more valuable than another, wouldn't individual ticket sales be a better measure of success? What about including worldwide box office figures in the opening weekend numbers? Would that provide a more accurate view?

It's tricky in Hollywood, where perception is everything. With ticket sales on the decline in the U.S., reporting just those numbers could imply a negative trend — even in years that break revenue records. Including worldwide sales in opening weekend figures might inflate blockbusters' success, potentially leading to even fewer gambles taken on smaller, more thoughtful productions. Plus, because theaters in international markets are less likely to be equipped with box office software, it's more difficult for Rentrak to produce up-to-the-minute international figures [source: Bialik].

Another option would be to measure success based on the amount it cost the studio to make the movie, or cost per ticket sold. This can make smaller-budget successes look even more profitable than costly adventure fare.

There are no signs of Hollywood changing anytime soon. During years like 2013, Hollywood's highest grossing year ever, the status quo works just fine. Then again, ticket sales hit a 19-year low in 2014. Moviegoers bought 1.26 billion tickets, which brought in a total of $10.35 billion — down more than 5 percent from 2013 [source: Lang]. As box office systems become more efficient and success increasingly depends on global transparency, the industry may not be in a position to insist on an outdated reporting style.

No Future in Hollywood Futures

One of the best movies about commodities trading is the 1980s Eddie Murphy and Dan Aykroyd comedy, "Trading Places." If that movie inspires you to try to invest in the box office futures, however, you're out of luck. With the growth of the Internet in the early 2000s, some futures traders attempted to create a market for predicting and investing in future box office performance. The investment firm Cantor Fitzgerald was said to have a client base of more than 10,000 investors ready to trade on a Hollywood Stock Exchange. The MPAA actively lobbied against these efforts, and in 2010, Congress banned the trading of movie futures on Wall Street and anywhere else [source: Frankel]. It's just another example of Hollywood's reluctance to become an industry that's more transparent about what it earns, and how.

I remember a time in my life when a box-office record changed everything. It was in May 1990, when the movie "Pretty Woman" crossed the $100 million mark in gross box office revenues. It didn't do it in a single weekend of course (that particular record was not reached until 2002 with the Sam Raimi-directed "Spider-Man" [source: Jacobs]). By comparison, "Pretty Woman" had an $11 million opening weekend and was still No. 1 at the box office. The movie had the kind of staying power you don't see in today's movies: It hung out at No. 1 for four non-consecutive weeks and was in the top ten for 16 weeks. It crossed the $100 million mark at week eight, which was a big story in entertainment media. It ended up grossing a total of more than $463 million in revenues [source: Box Office Mojo]. And it changed the way Hollywood looked at romcoms and their stars (including top earners like Julia Roberts, Meg Ryan and Sandra Bullock). Twenty-five years later, romantic comedies are out and action franchises rule. Not being the biggest fan of superhero fare, I find it comforting to remember that Hollywood, much like its beloved Transformers, is ever changing. You never know what will hit next.