How Box Office Numbers Are Reported 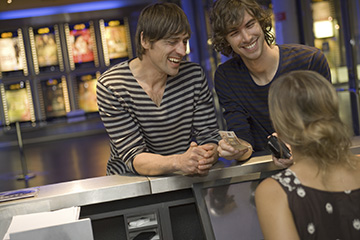 Box office projections can carry weight with moviegoers who are on the fence about committing a chunk of change on the theater experience.
FlairImages/iStock

There was a time when the news didn't include weekend box office reports. Movie theater companies would total the numbers from their franchises and send them to the studios in due time rather than real time. The numbers were reported manually and therefore were not always accurate. In the 1970s, the studios eventually realized that by reporting numbers to the Hollywood press, they could generate free publicity for the most popular movies. This motivated theaters to report accurate numbers more quickly [source: Bialik].

Today, box office numbers are widely reported in national media, and ticket sales at the theaters are tracked by media measurement and analysis serviceRentrak. Each ticket sold and dollar collected at theaters around the world is reported directly to Rentrak and put into a database accessible not to the media, but to a small number of studio execs. Rentrak's numbers are generally reported up-to-the-minute, but, as we mentioned earlier, there are some 10 percent of North American theaters (and a greater percentage internationally) that still track box office numbers manually (think: small towns or rural areas without computerized ticketing.)

The Sunday morning of a film's opening weekend, studio executives will tally up the dollars earned up to that point and use those totals to estimate what the grosses will look like Monday morning. These estimates are reported to the media on Sunday and revised on Monday once the actual numbers have been received.

A margin of 10 percent can make a difference in a film's perceived success, especially if it's a blockbuster designed to draw massive audiences and break box office records. Rather than wait, studio executives prefer to estimate instead. And they are usually pretty accurate, but there have been surprises. Clint Eastwood's "American Sniper" took in twice as much as predicted over its opening weekend in January 2015, breaking a January box office record by earning $90.2 million during its three-day opening period and $105.2 million for the extended Martin Luther King Jr. Day holiday weekend [source: McClintock]. When Transformers estimates were reported the Sunday after its release, they already seemed too high to reporters. Come Monday, the studio stuck with its story, reporting that the movie had brought in $100.38 million.

After opening weekend, a film's box office success will continue to be tracked on the basis of daily, weekly, weekend, monthly, quarterly, seasonal, yearly and total ticket sales. The Motion Picture Association of America (MPAA) records box office numbers for all of the year's movies. A film's actual revenue will be determined over time and will include factors like merchandising, product placement fees, television rights and DVD sales.

Box office sales from outside North America will also be included in a film's total gross. While not typically included in opening weekend estimates or reports, these days, foreign box office numbers play a larger role in a movie's overall profits.