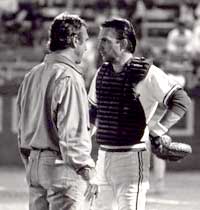 The rich tradition and history of the Durham Bulls illustrates, in many ways, how the minor leagues in the United States have evolved. Durham has been a baseball town since 1902, when the Durham Bulls took the field for the first time in George Lyon Ball Park as a member of the North Carolina State Professional Baseball League. The Bulls' name came from the town's most successful industry at the time -- tobacco -- and most popular brand of tobacco, Bull Durham. (The movie came later!)

Early leagues opened and folded and shut down on several occasions due to World War I, the Depression and World War II. The team won its first league championship in 1924. And the ballpark, which had undergone two name changes, echoed the team's moniker with the new name, El Toro ("the bull" in Spanish) Park in 1926.

Durham began its first major league affiliation in 1933 with the New York Yankees. Following that season, local philanthropists donated $20,000 to the city, which purchased El Toro and renamed it once again -- this time to Durham Athletic Park, or what locals call the DAP. This park, located near downtown Durham's tobacco warehouses (now used for other functions), became an integral part of the community, drawing families and sports fans from across the region to the charming, traditional baseball park. (Locals so loved the DAP that the Bulls feared they would not accept the new, larger DBAP (Durham Bulls Athletic Park), when it was opened in 1995).

Over the years, the Durham Bulls have been affiliated with the Cincinnati Reds (1936-40), the Brooklyn Dodgers (1941-47), the Detroit Tigers (1948-61), the National League expansion team Houston Astros (1962-66), the other National League expansion team New York Mets (1967-69) and the Philadelphia Phillies (1969-72). The Bulls' longest relationship (to date) was with the Atlanta Braves, starting in 1980 and ending in 1996, when the Bulls were granted a Triple-A franchise with the Tampa Bay Devil Rays for a team in the International League.

Other historic moments over the years included:

Minor leagues expert Lacy Lusk told HowStuffWorks that the Durham Bulls were among the early leaders of the modern-times minor league "boom." "The Bulls -- even before the movie "Bull Durham" came out -- were a popular team. Since the same players rarely stay with a team for more than a couple of years, loyalty should definitely be built up around the brand, the ballpark or simply the entertainment value of the game," he said. "Winning and losing has little to do with a minor league team's success at the gate, and the Bulls' operators understand that. With a new ballpark and their name recognition, the Bulls have been one of the teams at the front of the minor league boom we're still experiencing."