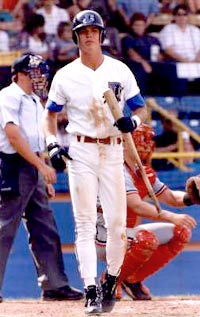 Most major league teams have minor leagues structured like this:

Although there are some baseball stars who are drafted or signed to contracts and go straight to the majors, they are the exception to the rule. The majority of players play at least one minor league season. Occasionally, exceptional players, such as former Durham Bull Andruw Jones (now a centerfielder for the Atlanta Braves), whirls through all the farm teams in one season and winds up in the majors the following season.

Each minor league team plays in a league of teams with players at similar levels of proficiency, usually with all the teams in the league within busing distance of one another (long, dull bus rides are among some players' least favorite memories of their time in the minors!). As a player advances to AA and AAA, many of those bus trips are replaced by plane rides because league teams are geographically farther apart. (Salaries go up, too!)

All (with the exception of short-season teams which play 76 games) professional baseball players play at least 140 games, working seven-day weeks from early April until (depending on post-season play) the summer's end. (Rain-outs, which once provided an occasional day off, seldom happen anymore, due to the much improved drainage systems in today's ballparks. The only remaining day off? All-Star Game day in July and that's only a day off for players who aren't chosen to play in the game.)

Some minor league teams use some version of their big club's name. However, because of the popularity and tradition of the Durham Bulls, the team has retained its name, and its familiar logo of a smoke-snorting bull.