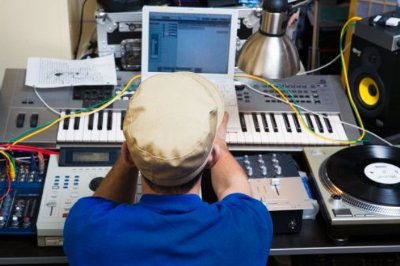 The classic MIDI synthesizer is the electronic keyboard, resembling a small piano. When you press a key on the keyboard, you hear a tone. Most new keyboards come with hundreds of different preset instrument sounds and effects from which to choose.

But when you press a key on a MIDI synthesizer, in addition to creating an audible tone, you also create MIDI data. If you connect the keyboard to a computer, you can record that MIDI data onto a sequencing program. Or you can connect that keyboard to another device, like a drum machine or sampler, and control that device through MIDI commands.

Over the years, many conventional instruments have been converted into MIDI synthesizers. There are special guitar synthesizers that have touch-sensitive pads instead of frets. On stringed instruments, frets are the raised portions on the neck that divide it into musical fixed elements. On a guitar, for example, each fret represents one semitone.

There are wind instrument synthesizers that look like plastic clarinets, but can be adjusted to play like a saxophone. And full drum sets can be constructed of MIDI drum pads, cymbals and high-hats.

Let's use an example. As we mentioned earlier, the original motivation for inventing MIDI was that musicians wanted to be able to control multiple electronic instruments from one device. This device, usually a keyboard, is called the controller. Different sections of the keyboard can be assigned to control different instruments. Perhaps the lower register controls the drum machine, the middle register controls a Moog synthesizer, and the upper register plays an electronic flute. The controller itself doesn't generate any sound. It just sends out the MIDI messages telling the other instruments what to play.

Today, there are special MIDI controllers -- still mostly keyboards -- that come equipped with multiple knobs and faders to manipulate the instruments they're emulating or controlling. These MIDI controllers don't come with hundreds of preloaded sounds and effects because they generate all of their audio through third-party hardware and software.

MIDI controllers, like MIDI synthesizers, come in all shapes and sizes. There are MIDI controllers that look like guitars, clarinets and drums. Plus there are special foot pedals and elaborate control consoles with dozens of knobs and faders for professional quality mixing. There are even special MIDI consoles to control stage lighting during a show.