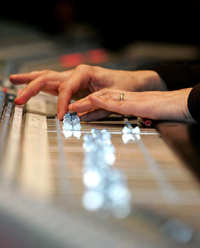 MIDI is nothing more than data -- a set of instructions. MIDI data contains a list of events or messages that tell an electronic device (musical instrument, computer sound card, cell phone, et cetera) how to generate a certain sound. Here are a few examples of typical MIDI messages:

When you record music onto a computer using MIDI, the software saves this list of messages and instructions as a .MID file. If you play the .MID file back on an electronic keyboard, the keyboard's internal synthesizer software follows the instructions to play back the song. The keyboard will play a certain key with a certain velocity and hold it for a specified amount of time before moving on to the next note.

But .MID files aren't restricted to keyboards or other electronic musical instruments. They can be played on any electronic device that contains synthesizer software. Any computer with a sound card can play back .MID files. Cell phones use .MID files to play elaborate ringtones. MIDI data files are perfect for karaoke machines, because they allow the machine to easily change pitch for different vocal ranges. The .MID file will sound a little different on each device because the audio sources are different.

The karaoke example highlights one of the advantages of .MID files. Since the .MID file contains no actual music or sounds, it can be modified without having to re-record any audio. You can speed up the tempo of a MIDI file without the "Chipmunks effect" of warping the pitch, and you can play it with any MIDI compatible musical instrument or device.

And since MIDI files don't contain sampled audio like MP3 or WAV files, they're comparatively much smaller than audio files. A minute of compressed audio adds up to around 10Mb (megabytes) of data, while a minute of sound translated into MIDI only takes up 10Kb (kilobytes) [source: MIDI Manufacturers Association]. This makes MIDI a great choice for memory-starved devices like cell phones and video games.

Now let's look at the difference between MIDI instruments and MIDI controllers.