The Health Risks of the Marathon 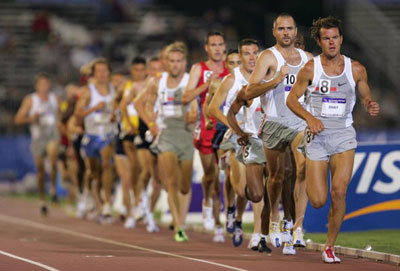 Being able to run 26.2 miles means you're in optimal health, right? Not exactly. We've already identified some of the benefits of long-distance, endurance running, but now we'll delve into the darker side of the marathon.

Marathoners who die training or on the race course usually make headlines because these tragedies seem so unusual -- who could be in better health and less likely to die than a runner? At the age of 52, Jim Fixx, a celebrated runner who wrote "The Complete Book of Running," died in 1984 of arteriosclerosis [source: New York Times]. In this condition, the arteries' walls become clogged and thickened, causing less blood to flow through them. In 2007, 28-year-old Ryan Shay died while competing in the U.S. Olympic marathon trials. His death was attributed to an irregular heartbeat [source: AP].

It's pretty obvious that running affects the heart, but did you know that running can actually increase the size of the heart? Hearts can enlarge when an athlete is engaged in serious physical training. The body compensates for the increased amount of blood it needs to pump throughout the body by increasing the size of the organ where it originates. Enlarged hearts can lead to arrhythmia, or irregular heartbeat, which can, in turn, lead to heart failure. Diagnosis of this condition is tricky -- it's difficult to tell whether an athlete's enlarged heart and its thicker walls are exercise-induced or a sign of hereditary disease [source: Allison].

Another rare but potentially fatal condition is hyponatremia. This occurs when runners drink too much water while racing. Your body loses sodium when you sweat, and drinking too much water depletes your sodium even further because you release it through urination. If you take in too much fluid, your muscles can't coordinate the proper electrical transmissions with your heart, resulting in a sudden cardiac arrest (SCA) [source: Galloway interview]. To avoid hyponatremia, it's best to limit your fluid intake to no more than 13 to 27 ounces per hour [source: Galloway interview].

Some marathoners assume that their fitness level absolves them from health problems. This simply isn't the case. Medical examinations can pinpoint the kinds of heart irregularities and risk factors that kill and injure runners. But there are ways to reduce your risk factors, too. Don't assume that you can eat or drink whatever you want because running will burn off the calories -- diets rich in saturated fat can lead to heart problems further down the road.

In addition to these life-threatening aspects of the sport, there are other sports injuries to beware of. Most of these are overuse or overtraining injuries that can be prevented by tapering your training -- that is, resting properly and cutting back on your mileage. These are a few of the most common infirmities:

While you should approach the sport with caution, you should also have fun running. Specialized training programs can help you achieve this goal. Running guru Jeff Galloway says his biggest running accomplishment is staying injury-free for 29 years. His philosophy? "I am personally against injuries, death and puking" [source: Galloway interview].

For more information on marathons and related topics, visit the links below.

Read these articles to learn more about the Olympic games: