by HowStuffWorks.com Contributors
NEXT PAGE 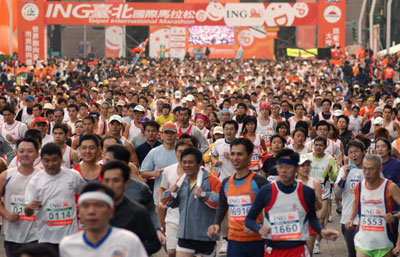 Despite what Bruce Springsteen would have us believe, some scientific studies have attempted to prove that humans simply weren't born to run. We are, after all, bipeds -- we stand and move on two legs. Cheetahs, pumas and other lightning-fast sprinters of the animal kingdom have the advantage of two extra legs to propel them. And as humankind has evolved and advanced over time, we seem to have even fewer reasons to move quickly. Hunting weaponry resolved our need to chase after fast-moving prey. Trains, automobiles and airplanes eliminated the problem of traversing long distances on our own two feet. And now, texting and e-mailing co-workers rather than moseying two cubicles' distance to share a message can keep us stationary nearly all day.

At least one segment of the population refutes this theory: marathoners. As a group, marathoners are disciplined, resilient people. As individuals, marathoners have many perspectives about the sport. For some, the marathon is a competitive race. For others, it's a test of mental endurance -- or even a social event where they can meet like-minded fitness enthusiasts. And for the improperly trained, it's 26.2 miles of muscle-aching torture.

While this article is by no means intended to be your training guide to what is one of the world's most popular endurance events, it should demystify certain aspects of the marathon. It may even get you thinking about whether you can attempt this athletic feat. And you wouldn't be alone in these grandiose considerations. Many marathoners approach the event with modest hopes: They dream of simply finishing the race. What is it about a marathon that inspires unlikely runners to shape up and lace up their sneakers? Is running a marathon really something anyone can do?

Smear on some anti-chafing balm and take your mark: On the next page, we'll learn about the history of the marathon.

Special thanks to Jeff Galloway, U.S. Olympian, running coach and founder of the Galloway Run-Walk Method, for his assistance with this article.