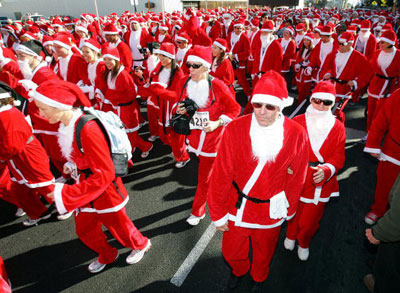 Runners come in all shapes and sizes, like these competitors dressed in Santa Claus suits competing in the Las Vegas Great Santa Run 5k on Dec. 9, 2006.
Ethan Miller/Getty Images for Opportunity Village

If you've ever cheered on the sidelines of a marathon course or heard a friend recount the victorious feeling of crossing the finish line, you know the kind of well-won bragging rights that come with the marathon. It's not hard to be inspired by this legendary distance -- and it's not uncommon to be intimidated by it.

When you think of a marathoner, do you imagine the stick-thin man in teeny-tiny shorts leading the pack? He represents only a fraction of the marathoning demographic.

Until the 1970s, the kind of thought that influenced the marathon detractors in the Olympics kept hold in the popular imagination. People assumed that the marathon was a dangerous feat and that only the most elite athletes could participate. Most runners raced to win; very few -- if any -- ran for fun or good health [source: Bloch]. When was the turning point?

Marathoner Gordon Bakoulis Bloch attributes the shifting attitudes to two factors: the American marathon victory at the 1972 Olympic Games (Frank Shorter took the gold in Munich) and the "fitness revolution" that was gathering force [source: Bloch]. While many opted for leotards, leg warmers and Jane Fonda's aerobic workouts, others discovered the economic practicality of running. As Boston University Athletic Enhancement Center (BUAEC) chairman Noel Vigue, M.Ed., explains, running is an inexpensive and effective way to stay in shape. Its benefits include:

As more people took up running for health and sport, road racing became popular. These races spoke to people's competitive natures and offered an opportunity for runners to socialize with one another. While many runners work up to the 26.2 mile (42.195 km) distance from more modest distances like 5ks and 10ks, others take the all-or-nothing approach to road racing and begin with the ultimate distance: the marathon.

Who's running these races? The majority of these runners are men, but female participation is increasing steadily. Katherine Switzer, the first official female Boston Marathon participant, explains in her book "Marathon Woman" that perception of age plays into the number of women runners -- 40 is no longer considered "old," and women in their 50s and 60s are embracing physical challenges. She adds that women today are outgrowing the cultural perspective that athleticism is "unladylike" [source: Young]. While most races require participants to be more than 18 years of age or to have a guardian-signed waiver, Running USA reports that over the past 15 years, the percentage of runners under 20 years old has increased from 1 to 1.8 percent. Another surprising statistic? Road Running Information Center shows that most long-distance runners are college educated -- anywhere from 74 to 93 percent of them [source: Running USA].

In addition to strengthening your body, the marathon also builds another important muscle: your brain. The marathoner must always think ahead. From planning training schedules to finding thoughts to occupy your mind on long runs of 15 miles or more, you must find ways to overcome burnout and boredom and listen to your body.

We'll talk about some training strategies next.

Astronaut Sunita Williams trained at the International Space Station for the Boston Marathon. She ran the 26.2 miles (42.2 kilometers) while tethered to a treadmill inside the space station. In this video from Reuters, see how she accomplished this goal.