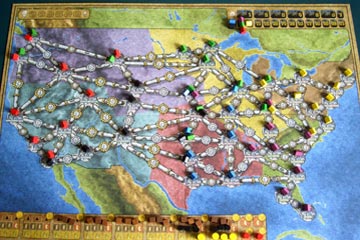 The colorful map that comprises the "Power Grid" game board depicts the U.S. and its major cities. The other side of the board represents Germany.
Courtesy Ed Grabianowski

Power Grid is a popular board game in which players compete to purchase power plants, expand their power networks into cities, then buy enough natural resources to power those cities. It combines an economic system that simulates supply and demand with an auction round that pits players against each other as they try to buy the latest power plant technology.

The game was originally created in Germany under the name Funkenschlag. In the original incarnation, Funkenschlag was a crayon game: The connections between the cities weren't fixed – players drew them in with crayons, which could be wiped off the board when the game was over. The second edition of Funkenschlag removed the crayon mechanic (made famous by the Empire Builder series of railroad games, among others) and replaced it with fixed connections between cities. When Funkenschlag was adapted and translated to English via U.S. publisher Rio Grande Games, it got a new name: Power Grid. While the basic version comes with a two-sided board depicting the U.S. and Germany, there are expansions and international versions available that depict Italy, Japan, Central Europe, Korea and other nations or regions [source: Rio Grande Games].

While Power Grid is a fun game that creates many interesting competitive situations, it's also a very effective educational game. Kids who play Power Grid will learn about basic economic principles and environmental issues, and their math skills will get a serious workout.

If you want to know how to play Power Grid -- and better yet, how to win -- you've come to the right place. We'll start on the next page with the rules.

The goal of Power Grid is to extend your power network into a fixed number of cities (usually 17) and then power more cities than any other player. The game is designed for three to six players -- Power Grid doesn't really work as a two player game, so make sure to invite some friends over. The game scales perfectly to the number of players by simply reducing the number of map sections used.

The game board shows a nation (either the U.S. or Germany in the basic U.S. version, depending on which side you choose) divided into six regions delineated by color. Cities on the map have three spaces for players to place colored wooden houses that show control of that city, plus connections between cities, each marked by a number which shows the cost for connecting cities along that route. Other tokens on the board represent resources used to generate power.

Each turn is divided into a series of phases in which all players act. The order the players take in each phase is determined by the number of cities they control, and is set up to create a disadvantage to whichever player is in the lead. This natural handicapping mechanic keeps games pretty close. Determining player order is actually the first phase of a turn.

The second phase is the auction phase. Cards depicting various power plants are arrayed on the table. Players take turns bidding on these power plants, which differ by the amount of power they generate and the materials they consume to do so. At the beginning of the game, the power plants will be very inefficient, but as the game goes on, more advanced plants will show up on the auction market. For example, an early plant might consume two coal resources to power two cities. A later plant might consume three oil resources, but power six cities. Wind-powered plants power cities without consuming any resources.

The third phase allows players to purchase the resources that they will later use to power their plants. There are four resource types: coal, oil, garbage and uranium. The available resources are arrayed on the board on a market that shows their prices. As players buy resources, any remaining resources of that type will cost more (effectively modeling supply and demand).

Phase four is the city purchasing phase. Players actually purchase access to each city to expand their power network. At first, only one player can build into a city, and it costs 10 Elektro (the game's currency) to access a city. There is also a connection fee for bridging the distance between cities, which varies from city to city. Later in the game, a second and third player will be able to move into the electric market within a given city, but it costs more: 15 Elektro for the second connection, 20 for the third.

In the fifth phase, players will expend the resources they purchased to power the cities they own. The number of cities powered determines how much a player earns to use for the next turn's batch of auctions, resource buying and city buying. This is also a clean-up phase. Resources are added to the market in fixed amounts, and certain power plants are removed from the auction market to make sure it doesn't get stagnant and keep new technologies moving into the market [source: Rio Grande Games].

In the next section, we'll talk strategy, with tips on how to come out on top when you play Power Grid. 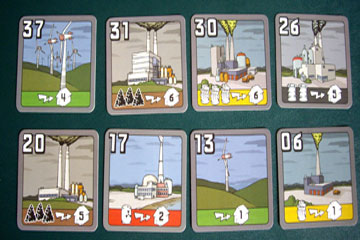