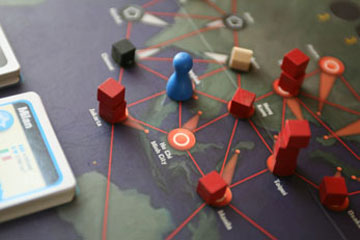 Disease cubes pile up in a game of Pandemic.
Bonnie J. Heath Photography

When you strip away the theme, art and story, Pandemic is a strategy game in which up two to four players collaborate on problem-solving strategies to overcome an escalating predicament. While personality clashes and disagreements at first might seem prohibitive to winning, designer Matt Leacock claims that group dynamics actually improve performance.

In a 2009 interview with The Bygone Bureau, an online magazine, Leacock said that he'll sometimes play the game solo, controlling all four characters. In a normal game (Pandemic comes with directions on how to play introductory, normal and heroic versions of the game), players can openly discuss the cards in their hand but can't actually show their hand. By playing solo, Leacock was able to tackle the game with perfect information and perfect cooperation among the characters. Surprisingly enough, he found such a solo path less successful since fewer strategies and points of view were involved. So perhaps that most important strategy for Pandemic is to recognize the value of group problem-solving.

Players also should heed their character's strength. For instance, the medic's advantage lies in cleaning out disease cubes in infected cities. It's a very action-oriented role. The researcher, on the other hand, is a gifted facilitator, able to trade cards with other players under fewer restrictions. You wouldn't want to play both characters the same way.

Proper threat assessment is also a strategic must. Travel eats up a lot of action points in Pandemic, so you don't want to be flitting about constantly when you could be spending those points clearing disease cubes from the board. Chain reaction outbreaks should be avoided at all cost, but not every outbreak is worth freaking out over and abandoning ongoing efforts to fix -- especially if that city card isn't due to come into play any time soon.

Finally, the only way to win the game is to cure all four diseases -- and you can do this even if those pesky cubes still litter the map. As satisfying as it may be to sweep them off the board, it's more important to find a cure for blue disease than to cure individual North American cities stricken with the blue infection.

Ready to play a game of Pandemic for yourself? Explore the links below for more information on this and other mentally addictive games.