How to Play Pandemic: Board and Setup 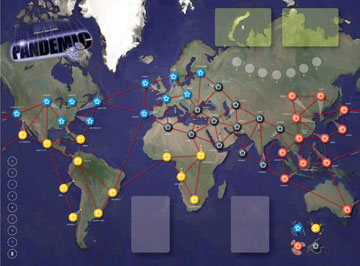 The game board for Pandemic
Image courtesy Z-Man Games

Pandemic falls more in line with the German tradition of board games such as The Settlers of Catan than American standards like Monopoly. German-style board games tend to emphasize strategy, economics and cooperation while downplaying luck and military themes. Pandemic not only fits that bill, it was also nominated for German Family Game of the Year by a jury of German game critics.

Intended for ages 10 and up, Pandemic is very accessible but still entails a bit more complexity than the average family board game. You'll want to consult the in-box rule book or download a free digital copy from Z-Man Games. The 2009 expansion edition Pandemic: On The Brink adds even more challenge and rule complexity. For the purposes of this article, we'll break down the original game's mechanics and flow of play.

Game board: The centerpiece of Pandemic is the world-map game board with major population centers joined by red lines. All the cities are colored blue, yellow, black or red to correspond with the four diseases in the game. You'll notice spaces for the deck of 48 infection cards and 59 player cards. The "infection rate track" dictates how many infection cards are drawn during a given part of the game. The "outbreak indicator" keeps track of outbreak events, from the game-starting zero to the game-ending eight. Finally, the "cures discovered" area allows you to chart which of the four diseases you've managed to find cures for or eradicate successfully.

Setup: As far as board games go, the setup for Pandemic is straightforward. Infection and player cards go in their designated spots. The infection rate starts at two, and the outbreak indicator starts at zero. Each player randomly chooses a character role card and places his or her pawn on the city of Atlanta, the real-life headquarters of the Centers for Disease Control and Prevention (CDC).

The players also set a single research station marker on Atlanta. As the game progresses, they'll build more research stations to both facilitate faster travel around the game world and to discover cures for the four diseases. Each player takes a starting hand of two to four player cards, depending on the number of players, and nine random infection cards dictate which unfortunate cities will begin the game under the weather.

Who goes first? Why, the player who was most recently sick, of course.