Browse the article How Dominoes Works 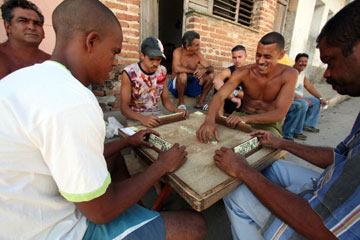 Men play dominoes on the sidewalk in Trinidad, Cuba in 2007.
Matt Cardy/Getty Images

With its storied history -- and variations sporting names as cool as Mexican Train, Chickenfoot and Blind Hughie -- it's no wonder that the game of dominoes has been so popular for so many years. The exact origins of the game are hazy, though most credit the Chinese with inventing dominoes around 1120. The game spread within China and evolved into the even more popular mah-jongg. It wasn't until around the 17th or 18th century that dominoes made it to Europe and finally to the New World colonies [source: University of Waterloo]. Since then, the game has become a traditional mainstay: Today, you can find dominoes played in backyard parties in Los Angeles, on the sidewalks of Brooklyn, in the pubs of the U.K., in the barrios of Cuba, and in big-money tournaments in Alabama and Las Vegas.

Perhaps the allure of dominoes is found in its simplistic versatility. The dominoes used to play the game are rectangular tiles. The width of a European domino is half its length. The domino is bisected by a single line and dots known as pips cover each side. Pips are used for scoring or to connect the end of one domino tile to another on the playing surface. Really, that's all there is to it, but this basic design has allowed players around the world to derive their own versions of the game from the basic rules.

There are about as many variations of the game as there are cultures that play them. In this article, we're going to look at the basic rules and strategy of dominoes. It's with this little bit of knowledge that players have gone on to enjoy the game, create their own variations and win money in tournaments.

Even if you never end up World Domino Champion, learning how to play dominoes is easy. All you need is a set of tiles, a flat surface to play on and a few friends for a good game.

On the next page, we'll look at the basic rules of dominoes. 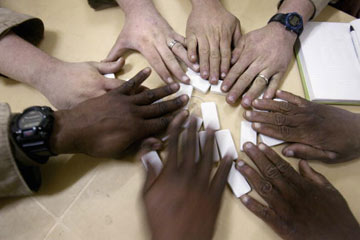 U.S. soldiers stationed in Mosul, Iraq in 2005 draw tiles for their hands from the boneyard.
Ghaith Abdul-Ahad/Getty Images

The traditional version of dominoes calls for the tiles to be arranged only end to end in a straight line or perpendicular to one another, forming L shapes. Only the open ends -- those with pips that aren't connected to another tile's pips -- are available for play. Once one tile end is connected to another, it's closed off for play.

The rules governing how the game ends depend on whether you're playing a block, draw or points game. In a block game, the game ends when the first person runs out of his or her original set of tiles, called a hand, as in poker. Again, the number of tiles in a starting hand depends on the game, but in a four-player game using a standard 28-piece set, each player usually has five or six tiles per hand.

In a block game, the remaining tiles after the players draw their initial hand remain in the boneyard -- the pile from which the players draw the tiles for their hands. In a draw game, the game ends similarly to a block game, with the first person playing their last tile proclaimed the winner. But in a draw game, the tiles in the boneyard become part of the game. The player whose turn it is can draw tiles from the boneyard until he or she comes up with a tile that has a playable number of pips.

In a points game, the first person to reach an agreed-upon winning score -- usually 100 to 150 points -- wins. Scoring is calculated after each tile is played by adding up the number of pips found on the open ends of all the tiles on the playing surface. This is called the board count.

Now that you know the rules, how do you actually play the game? Head to the next page and find out.

How to Play Dominoes 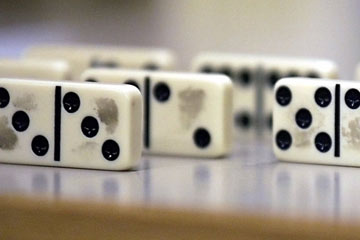 Games begin with the downer lays the spinner, the highest double in any of the players' hands.
J. Pat Carter/AP Images

As we've seen, there are scores of variations on the game of dominoes. We'll take a look at how to play a simple dominoes game using the common 28-piece set for the sake of brevity. If it strikes your fancy, you can find rules for all variations of the game throughout the Internet.

The spinner is a special piece; it's the only tile where all four directions around it can be played (other tiles only have one or three directions after they're played, depending on whether L-shaped configurations are allowed). The tiles played on the spinner are also laid perpendicular to the center of the spinner; this creates a shape resembling a plus sign when two successive tiles are played against it.

In any case, the players must lay their tiles down and hook them so that the pips match the pips already played. So if a double six spinner has been laid, a tile with a six-pip end must be connected to it.

Players in a block game continue on, hooking corresponding pips to unconnected pips. If a player doesn't have a tile with an end to hook against an open pip, then the player must pass on that round. (In a draw game, the player could draw tiles from the boneyard or pass.) The person who plays all his tiles first -- and shouts, "Domino!" of course --wins.

Some people see dominoes as a game of blind luck that depends on what tiles you draw and what tiles other players lay down. This isn't really the case: Dominoes is actually a game in which skill and strategy are important, and so one of the more important factors in playing dominoes is keeping your tiles close at hand.

In the pubs of Britain, tiles are kept in two rows of three, one above the other. This allows the player to keep his tiles in one hand without showing others what he has. This leaves the other hand open to take a sip from his pint, so the story goes [source: Masters Games].

Whether you're sipping a pint or not during a game, it's important to keep your tiles face down so only you know the combinations you have. This is important because, based on the set you use to play, there are a finite number of pip combinations. For example, in a standard 28-piece set (also called a 6-6 set, because the six is the highest double tile), there are eight tile ends with four pips on them. A good player can quickly survey the table to see what tiles have already been played, which will give her an idea of what the other players have in their hands. If that player has a four-pip tile and sees that the other seven have already been played, playing the tile with the four-pip end out will guarantee no one else can play off of the tile. This leaves the player with one less tile, while confounding the other players.

Bluffing is a part of any non-scoring dominoes game. With scoring games, the stakes are even higher. We'll discuss those on the next page.

What about toppling dominoes?

Dominoes may be the most versatile game pieces ever created. In addition to playing the game, people like to stand the pieces on end in patterns or lines, tip them over and see what happens. The record for most dominoes toppled is just under 4.5 million tiles, set in Holland on World Domino Day 2009 by 90 people from 14 countries [source: Cullen]. 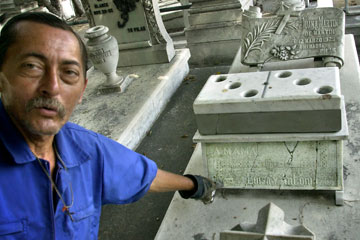 You can bet you would have had trouble beating Cuba's Juana Martina, who died playing dominoes and whose grave features a 3-3 tile.
Christobal Herrera/AP Images

In a scoring game, patience is a virtue. In standard block or draw games that don't keep points, the key is getting rid of your tiles. In a scoring game, it can be wiser to hang onto a tile rather than play it. This is because of how the board count changes with the laying of each tile.

Since new pips are added to the total every time a piece is put on the board, you'd think that the board count increases with each player's turn. This isn't the case: When a pip is hooked to another pip, they sort of cancel each other out. Only unhooked pips contribute to the board count. In other words, take another look at your tiles before you play them.

Consider this scenario: You're faced with a board that has a 10-point count and one of the open tiles has six pips. You have a tile with a six-pip end. But before you play your tile, look at the other end. Let's say it's a three (which would make it a 3-6 tile). If you hook the six end to the open six on the board, you'll end up removing three points from the board, since the sixes will cancel each other out. The original board count of 10 loses six points when you hook the six. This leaves a board count of four, plus the three you added with the other end of your tile leaves you with a score of seven for the round.

In this case, it would be better to hang onto your 3-6 tile until a three opens up, which will give you a chance to add three to the board count.

It's difficult to pass up what looks like an obvious play; since you're giving up points, you may still want to take the seven points by hooking the 3-6 to the open six. You can see that it takes some mettle; in some games where a timer's used, a player also needs nerves of steel.

Are you hooked yet? If so, head onto the next page for great links and lots more information on dominoes.