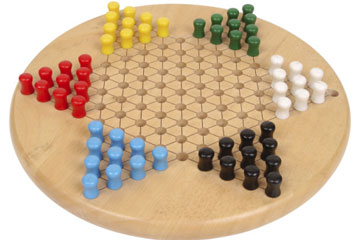 Move in "steps" and "hops" to the base opposite yours.
Hemera Technologies/PhotoObjects.net/Thinkstock

Chinese checkers is a simple, entertaining game that is both mentally challenging and easy to learn. The star-shaped board consists of a 61-hole central hexagon and six 10-hole equilateral triangles that extend outward from each side. Known as bases, the six triangle areas serve as the starting point for each player's pieces, and each one is typically a different color. This arrangement allows as few as two or as many as six players to participate simultaneously.

Setup varies slightly depending on how many people are playing. For a game between two players, each places 15 pieces of the appropriate color in opposing bases on the board. If there are more than two players, each will use just 10 pieces. Three players should occupy alternating bases on the board, while six will obviously use all bases on the board. However, there is some disagreement about the positioning of four or five players. Some rules suggest that if there are any more than three players, they can simply start from whichever bases they like. Others insist that four players must leave two opposing bases open and five players cannot play because the board will not be balanced.

The goal of Chinese checkers is to move all of the pieces in one's home base to the opposite base on the board using a series of moves called steps and hops. To execute a step, a player moves one of his or her pieces to any one of the six surrounding holes. Pieces can be moved greater distances by performing a hop. A player executes this move by jumping his or her piece over any adjacent piece on the board, regardless of whether it's an opponent's or a player's own piece. Only one piece can be cleared in a single jump, but a jump can be made in any direction, and multiple jumps can be combined during a turn. However, players are not compelled to make a hop, and unlike traditional checkers, an opponent's pieces are not collected when they are jumped. Steps and hops cannot be combined in a single move, and each player can only move one piece per turn. The first player to move all of his or her pieces into the opposing base wins.

Now that you know how to play, you probably want to know how to get better. Hop over to the next page for some Chinese checkers tricks and tips.