by Laurie L. Dove
Prev NEXT
2 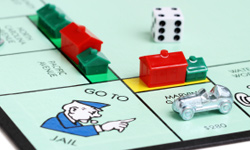 This game is breaking two of the building rules: Properties within a set are being developed unequally, and building beyond a single hotel per property is allowed.
©iStockphoto.com/NoDerog

There are four official Monopoly rules that dictate how players may build houses and hotels on their properties. First, you must purchase all of the properties in a color group (that is, you must have a monopoly in that color) before you can buy houses for any of those properties. Second, when you do buy houses, they must be distributed evenly among the properties: You must erect one house on each property in a set before you can put a second house on any of them, and so on. Third, you must put four houses on a property before you can erect a hotel, and in doing so you must return the houses to the bank. Fourth, only one hotel is allowed per property.

Several house rules can override these four, but we think the most egregious is the one that allows players to build more than one hotel on a property, increasing that property's earning potential exponentially. When multiple hotels can be built on a single property, a dominating player can create a building shortage that will not only inhibit competitors' progress, but will bankrupt them in the process -- ending the game before it becomes the battle of wits and wiles that it was intended to be [source: Davenport].