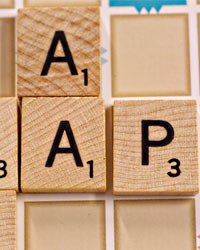 This little word isn't worth a lot of points, but it can help you get rid of an "a" tile before the game ends.
Image Courtesy of Elizabeth Johnston/HowStuffWorks.com

Solidified lava comes in two forms. Aa is rough like cinders. Pahoehoe, formed from hotter lava, is smooth. Both words are Hawaiian.

The game is winding down. This could be your last play. You can fit the word in almost anywhere there's another "a." It's only worth two points, but if they allow you to edge out your opponent, you'll be bragging about those two points for a while.