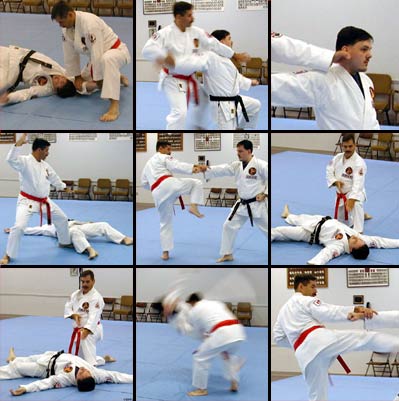 ­Karate developed out of martial arts styles designed to aid in combat. For the most part, these fighting styles were intended only for self-defense, but they did include a means of maiming or even killing a person. One element of this is close attention to human anatomy. By applying forceful blows to the most vulnerable parts of the body -- the face, the solar plexus, the groin -- a karateka can bring down an opponent in short order.

These days, karate is taught primarily as sport, not as a means of combat. Karatekas have several ways of demonstrating their skill without actually hurting another person.

To demonstrate mastery of punches, kicks and blocks, karatekas will work various combat simulations. In one exercise, called kata, karatekas carry out a pre-determined sequence of movements against an imaginary group of attackers. Kata is extremely important to beginning karate students, as it helps them perfect their technique.

More advanced karatekas may engage in kumite, a sort of freestyle sparring. In this activity, you fight with another karateka, but curb your punches. Typically, especially in the lower levels, karatekas will stop a few inches short of actually touching their opponent with a blow. Karatekas may also put on protective pads. Certain areas (below the belt, for example) are off limits.

In general practice, karatekas approach sparring as an open and engaging way to practice proper technique and concentration. But karatekas may also participate in more formal kumite competitions, known as "point sparring." In this sport, an umpire awards points, called ippons, when a karateka lands a successful hit while displaying excellent technique and attitude. The winner is the first karateka to score a certain number of points (typically three) or the karateka with the most points at the end of a certain time limit (usually one to three minutes).

Kata and kumite are effective demonstrations of karatekas' mastery of karate moves, as well as their attention and control. But they don't allow karatekas to demonstrate their full strength, as this would be extremely dangerous. Karatekas must use alternative means to show their full force.

Karate teachers may use a large shield to protect themselves from the full force of a student's attack. They might also use a protective, padded suit, but this is more common in general self-defense classes rather than conventional karate. One of the most popular displays of strength is tameshi wari, also known as the "breaking demonstration." With a great deal of practice and concentration, karatekas can break boards and bricks with only their feet and hands. Basically, they turn their appendages into natural chisels, breaking the structural integrity of an object by focusing the force of their entire body into a small area. As they progress to higher skill levels, karatekas practice breaking stronger and stronger blocks.