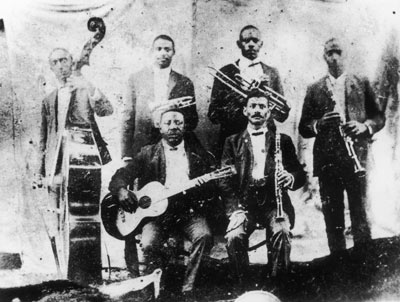 American musicians, historians, critics and listeners alike take pride in jazz, birthed in multicultural New Orleans. Many consider it to be the greatest and most original American export to the world.

Historians trace the origins of jazz to a number of different cultures and societal influences that converged in 19th-century New Orleans. Most significant was the import of men and women from Africa and the West Indies, taken as slaves for Colonial America, along with the refugees who fled Hispaniola to escape the bloodshed of the Haitian Revolution.

Slavery, colonialism and the exploitation of African peoples all play significant roles in the development of African-American music. In the early 1800s, slaves gathered in Congo Square in New Orleans to perform their traditional music and dances. Records from the time show that the slaves used string instruments, improvised and played drums in a polyrhythmic fashion (multiple syncopated rhythms played simultaneously).

Two types of African-American songs were important to the development of jazz: spirituals and work songs. Spirituals were religious folk songs that slaves sang to express their desire for freedom and their devotion to their faith. Unlike the primarily rhythm-based music of the dances in Congo Square, spirituals were vocal -- marked by multiple harmonies and improvised lyrics.

Work songs combine the rhythm of work with singing -- it's a tradition closely tied to the cultures of West Africa. These songs were used to synchronize a group as they worked together, with a leader calling out and the rest of the group responding. Many historians attribute the call-and-response pattern in jazz to this early form of African-American music.

The earliest jazz musicians were born within a short time of slavery -- it remained a vivid memory, passed down from older family members who lived before the Emancipation Proclamation. And though the official bonds of slavery had passed, African-Americans still found themselves treated unjustly by individuals and local legislation.

Also among the Africans and people from the Caribbean were Europeans. Scottish, English, Irish, French, Spanish and Italians made distinct contributions to the New Orleans melting pot. Over time, these cultures began to borrow and adopt from each other's traditions and music. Anthropologists call this cross-pollination syncretism. To put it simply, where African music was more rhythmically based, European music focused more on melody and harmony. Each took parts from the other. African music was Europeanized, and vice versa. This give-and-take relationship persisted into the 20th century and continues today as jazz is played around the world.

The lasting influence of the dances in Congo Square, spirituals, the blues, Creole music, European classical music and brass bands combined to make the earliest forms of jazz.

The early days of jazz were not very well documented. Buddy Bolden is commonly considered the first jazz musician, but he was born in 1877 -- and the first jazz bands are reported to have come on the scene around 1885. According to All Music Guide, Bolden formed his first band in 1895. Much of the information we have today comes through interviews from when the jazz craze was already well on its way. And, sadly, music from this early period was never recorded.

A new style of piano playing, developed toward the end of the 19th century, began to make its mark on jazz, too. But ragtime, unlike jazz, was not an improvised form of music. A piano player kept the beat with his left hand while playing a syncopated melody with the right. At the height of its popularity in the early 20th century, ragtime made inroads with jazz musicians who began to incorporate and embellish the technique within their own style.

­­In the early days, jazz and dancing were inextricably tied to each other. Many saw jazz as unwholesome and lower-class, largely because of its racial connections. But not everyone was opposed. White musicians, eager to learn the new music, began to seek out black musicians, and jazz started to explode.