The Myth and the Legend 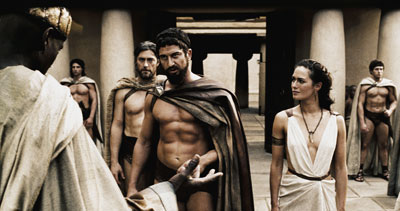 “I didn’t think having three hundred slow moving guys in skirts would be as cool as naked guys running with red capes,” Miller explains his choice of Spartan regalia. But full-frontal nudity was not an option for the film.

Warner Bros. “barely let me put them in the outfits they’re in. They wanted them way more clothed,” says Snyder, revealing that he received more notes about that, and details like the length of Leonidas’ beard, than about the film’s violence.

Familiar with the graphic novel, Gerard Butler was prepared for the semi-nudity, but that flowing cape took some getting used to. He tripped more than once. “We all did. Someone would be standing on your cape and you don't know it and then you go to walk and you get pulled back by the neck,” he relates.

As for the Persian army’s elite Immortals, “They [look] like ninjas because Frank loves Japanese art,” Snyder sums up. For him and for Miller, cool visuals and the spirit of the legend were more important than historical accuracy.

The leader of the Immortals, Xerxes' elite fighting force, brings his troops to a halt when confronted by an unimaginable obstacle on the battlefield.
Photo courtesy of Warner Bros. Pictures

“Taking liberties and making the story more abstract falls into historic tradition. Read Heroditas and you’ll see some exaggeration,” says Miller. Along those lines, the prose in his novel becomes the film’s narration by Dilios (David Wenham, The Lord of the Rings’ Faramir), who lives to tell the tale because Leonidas sends him home. “He wasn’t at the battle. But he describes this final confrontation between Xerxes and Leonidas in vivid detail,” Snyder points out. He also invented Leonidas’ wife Queen Gorgo (Lena Headey), as a way of “reminding the audience of what was happening back in Sparta.”

While the modern location of Thermopylae is a highway intersection, the movie’s representation approximates its ancient incarnation, with “an ocean on one side and a very narrow mountain pass on the other. The reason why the Spartans went there was at some point the Persian army was going to have to turn inward and this was the traditional place where they did it,” Snyder points out.

As the Spartan phalanx led by Leonidas (Gerard Butler, center) advances, the rear column of attacking Persians falls over the cliff's edge and into the sea below.
Photo courtesy of Warner Bros. Pictures

“We did look at a lot of art work and pictorial representation of what people wore and what weapons they used and how they fought, but nobody really knows if that’s true or not. There’s no pictorial record of what happened,” reminds Chris Watts. “But we were much more interested in it being a movie version of the comic book than we were in a movie version of history. This is about making Frank’s and Zack’s vision.”

Next, we'll look at how the actors got into shape.